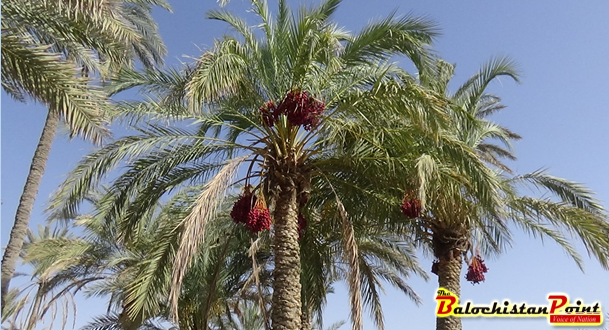 Balochistan, the largest province of Pakistan in terms of area with comparatively lesser population is not only replete with natural resources of Gas, Gold, Copper, silver, oil and other mine and minerals but according to agricultural experts it is gifted with four agro-ecological zones for a unique environment for the production of a great variety of quality fruits by producing 70 percent of date, 90 per cent of grapes, cherry and almonds, 60 per cent of peach, pomegranate, apricot and 34 per cent of apple.

But when it comes to discuss date yield, the scenario has changes. The produce which was marked 70 percent is declining day by day. Nako Sarbazi, a date-palm farmer in Panjgur city says that the Dubas-bug infestation and lack of water are the main production constraints faced by date palm farmers in Panjgur district.

Talking to the Balochistan Point Sarbazi told: “Dates have become source of income no more since the best variety grown in Balochistan, mainly in Panjgur is Mozati, but we sell it just in Rs 50-70, which is a complete loss for us.

“In this price neither we can buy pesticides to save our fruits nor can we rehabilitate tunnels (locally called Kariz) to overcome water crisis which is chief requirement for our date palm. Government has turned a blind eye towards rehabilitation of our century’s year old irrigation system of Karizes.”

Lack Of Irrigation Water a Cause Of Declined Date Palms Produce

Dr. Mumtaz Baloch, associate professor at Department of Social Work, University of Balochistan, Quetta, has researched for different international research journals on the effect of agricultural extension services in Panjgur and Pakistan. talking to the Balochistan Point he agreed with the grievances of common farmer like Sarbazi, and marked lack of irrigation water as one of the causes for declined date yield.

The ground water is tapped by making tunnels, locally called Kariz; this is the only major source of irrigation. The amount of water available is not adequate to irrigate date palm as required and it is due to poor maintenance of Karizes and the frequent occurrence of drought.

Currently, the projects of tube wells given on political basis to individuals are great threat to Kariz system of Panjgur and poor farmers’ since tunnels are owned on community basis but the tube wells individually. 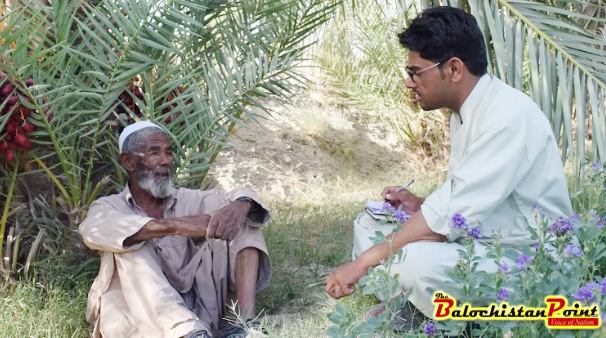 A local farmer Nako Sarbazi, sharing his grievances with writer.

A local farmer Muhammad Irshad, talking to the Balochistan Point said: “The large numbers of illegal tube wells are affecting groundwater and this is also one of the causes that Karizes in Panjgur are drying up due to low water level.”

“Abdul Qadir Baloch, Minister of National Assembly from Panjgur and Minister for States and Frontier Regions, released funding worth 30 million for rehabilitation of some 80 Kariz in Panjgur in current tenure, however, the funding was misused and failed to give any extraordinary result. “ Irshad Ahmed told this scribe.

According to National Agricultural Research Council (NARC) the dangerous date palm sap-sucking insect known as Dubas bug – locally known as Sherrgo or Loluk was first detected in 1999 in Balochistan’s Panjgur district, after its accidental introduction from neighboring areas of Iran most probably along with the planting material. It has been affecting date production and exports. 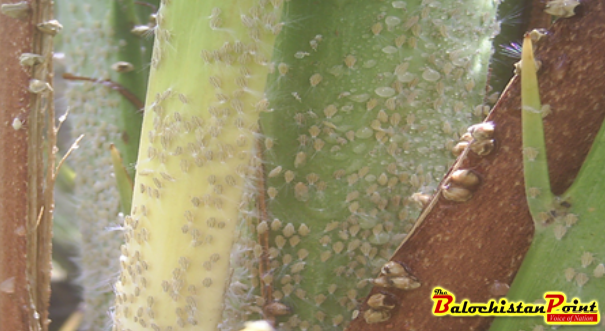 “The percentage of the loss has not been measured yet but roughly the production of old orchard has been affected more than 40 percent. The date trees dried in many areas like in Khudabadan, Essai and Bonistan. The old orchards have died more than 50 percent in overall district.” Rizwan Baloch shared. 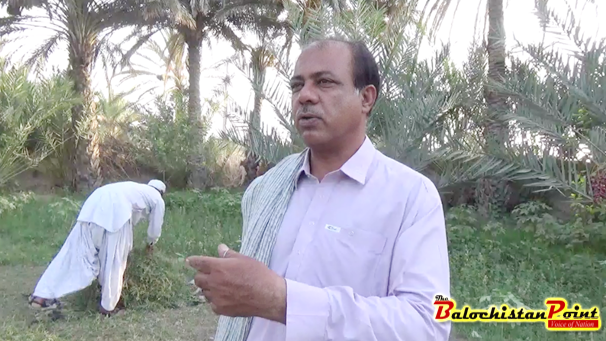 A local farmer Irshad Ahmed, talking to the scribe.

Date Palm farmer Irshad Ahmed said: “That last government spent millions of rupees on aerial spray of pesticides, and somehow success could be observed in Panjgur for controlling the insect but out of city the presence of Dubas bug is being reported.”

The agriculturists advise farmers to apply pesticides to date palm to prevent common pests which are damaging date palm trees and fruits frequently. However, the farmers are not able to apply these pesticides because small-scale farmers cannot afford the cost of these pesticides and they do not have suitable insecticide sprayers to reach the tops of tall trees. 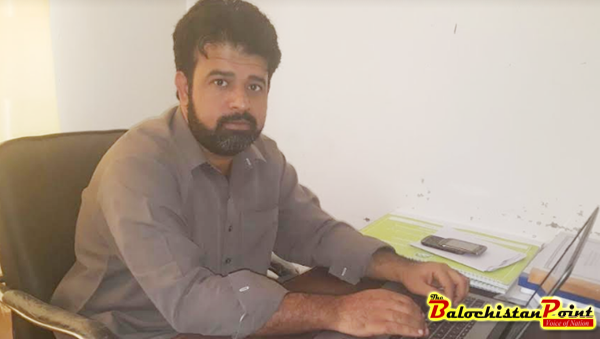 Observing the great loss of poor people, Imdad Baloch, Deputy Convener Civil Society Balochistan, who hails from Panjgur district criticized role of Agriculture department. He said that Agriculture department was having a huge number of human resources in Panjgur but unfortunately they were neither trained nor asked to perform their duties. No guidance from government was being given to local farmer.

Imdad Baloch said: “Some NGO/INGO are working in Panjgur in agriculture sector but the design of their programs are not according to ground needs of district Panjgur. The project designs are generalized as other part of the country which is commonly related to wheat corps etc, the activities of such NGO/INGOs should be planned according to agricultural need of district Panjgur.”

Adnan Baloch, a Research Officer at Directorate of Plant Protection, Quetta Balochistan said; “Due to the attacked by sherrgo and no adequate irrigation water the trees have become less vigorous and production has been decreased. 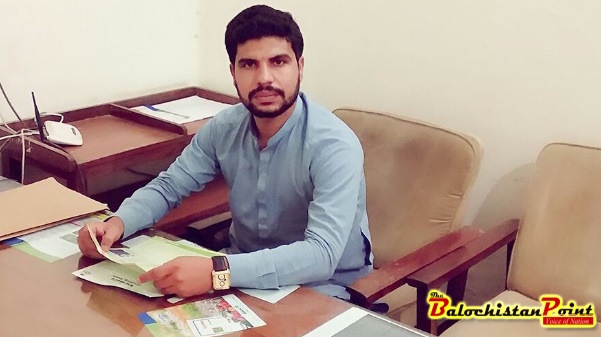 “Government should recruit some expert scientists to study the main cause of the sherrgo and its control. Later farmers can be facilitated by awareness rising workshops and training in the subject and preventive measure to keep other trees or orchard which are not yet affected.” Adnan Baloch suggested.

Secretary Agriculture Balochistan Mr. Abdul Rehman Buzdar talking to The Balochistan Point said that Government had initiated no such projects which specifically focused Date Palm production in Panjgur, however, two chief projects worth 500 million have been launched in Turbat which include a Date processing Plant and a cold storage facility. These will be advantageous for region and Panjgur will also benefit from them.

“Though, due to the increased tube wells the water level is decreasing, it is the mandate of irrigation department. They recharge ground water in kind of some structure such as dams, or storage of rain water. The agriculture department cannot stop growing number of tube wells or illegal tube wells, since the permission for tube wells is given in a committee head by Deputy Commissioner with technical support from Irrigation department and No Objection Certificate (NOC) is approved by mentioned committee for installation of tube wells.

An Irrigation officer on condition of anonymity told The Balochistan Point that if Kariz system was not given due attention so Panjgur would not only lose different varieties of Date Palm and its production but also centuries year old community owned irrigation system of Karizes. 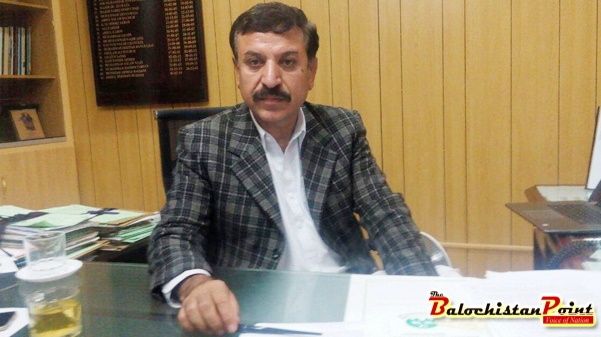 The irrigation officer suggested that government should build up dams near the most water deficient parts of Panjgr. There should be ban on installation tube wells to prevent low water level in the area.

Secretary Agriculture Balochistan said: “The attack of Dubas Bug can be alleviated by awareness campaigns and adopting the biological control by introducing a predator for this bug because it is very difficult to control by chemical application. The farmers can be facilitated by awareness rising workshops, trainings and prevent measures to keep the other trees or orchards protected which have not been affected.

Published in The Balochistan Point on August 14, 2017