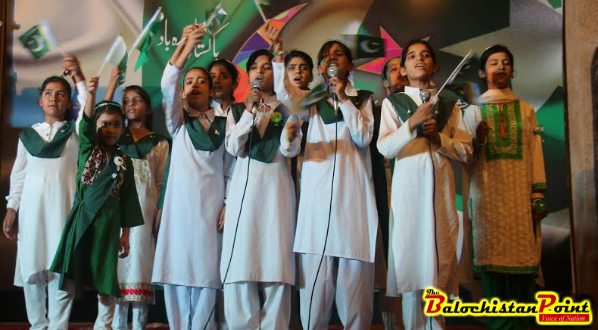 ISLAMABAD: The National Institute of Folk and Traditional Heritage (Lok Virsa) celebrated the independence day of Pakistan in a befitting manner here at Heritage Museum, Shakarparian. It was part of the ongoing activities chalked out by the Federal Ministry of Information, Broadcasting and National Heritage regarding 70 years celebrations of Pakistan which started on 1st August 2017.

Earlier in her welcoming remarks, Dr. Fouzia Saeed, Executive Director, Lok Virsa shed light on the activities chalked out by Lok Virsa marking 70 years celebrations of Pakistan. She said “The present focus of Lok Virsa is on youth, who are future of Pakistan. We want to inculcate them awareness about the indigenous folk culture. We have been successful in this initiative as thousands of youth and children are participating in our programs. Many of these have also performed on stage with folk artists and musicians”.

Later on traditional folk band “Khumariyaan” rocked at open air theatre of Lok Virsa. The 4 band members showcase their magic with instruments like the guitar, rubab and the native Pushto instrument called the Zeer Baghali .

They commenced the show with their famous track Bela, the track almost everyone has been listening to online and wondering how they have perfected the instrumental style.

Khumariyaan made people clap, head bang, swing, sing along and even made some audience members get up and dance. They sounded phenomenal as their music sounded enthralling.

The band comprises Farhan Ali Bogra on the rabab, Sparlay Rawail on lead guitars, Aamer Shafiq on rhythm guitars, Hammad Baig on the keyboard and backing vocals and Shiraz Khan on percussions. Bogra, however, has a deeper sentimental value attached to the rabab.

The story traces back to his childhood when his friend’s father threw away his son’s rabab because he thought it was the instrument of “Uncivilized people”. When his friend protested for days, the father bought him a guitar because it’s stereotyped as a “classy instrument”. This episode impacted Bogra’s life and inspired him to pick up the rabab and promote it through his band’s philosophy.

The Band well-received live performance on “Sheenai”, “Qataghani”, “Bela”, “Tamasha” and “Sakal”. They ended the show on their most famous track, Tamasha and naturally the crowd went crazy; they danced and they hooted and they went into a trance. Basically, they did exactly what Khumariyaan aims to do; &quot;entice musical ‘goose bumps’ “to people who listen their music.

The band members believe that, “If we manage to make the audience forget their worries for a few minutes the point of forming Khumariyaan would be fulfilled.” The band seems extremely gung-ho about their aim which to a third person seems slightly incredible amidst the political and social turmoil.

A large number of people from various walks of life attended the ceremony and enjoyed thrilling performances presented by young artists.

Published in The Balochistan Point on August 15, 2017