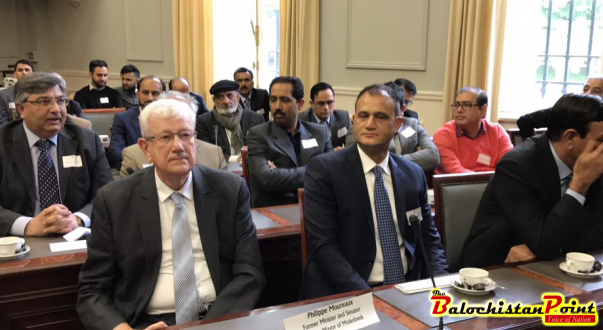 Delegation of the Balochistan Government Meets Parliamentarians at the Belgian Senate

The China Pakistan Economic Corridor (CPEC) will prove to be a game changer for Balochistan as it will bring substantial economic opportunities for the province as well as neighbouring countries of Pakistan as an entry and exit point for the One Belt One Road project, it holds also great prospects for the European countries.

These views were expressed by the members of a high level delegation from Balochistan, while addressing a well-attended meeting at the Belgian Senate today. The meeting was organized by Mr. Parvez Iqbal Loser, President of EU-Pakistan Friendship Federation, hosted by Senator Bertin Mampaka and moderated by the member Brussels Parliament Dr. Manzoor Zahoor Elahi.

The official spokesman of the Government of Balochistan Mr. Anwaar ul Haq Kakar gave a detailed briefing on the investment and business opportunities in Balochistan in the context of European countries, and in particularly Belgium.

Member Brussels Parliament Dr. Manzoor Zahoor Elahi, in his welcoming remarks said that the visit of Delegation from Balochistan will help promote business ties between Belgium and Pakistan. Senators Bertin Mampaka Andre du Bus de Warnaffe, Catherine Moureaux, and MEP Julie Ward commended the people of Pakistan for their resilience and expressed the need for enhancing bilateral relationship between Pakistan and Belgium. Courtesy: The Brussels Times