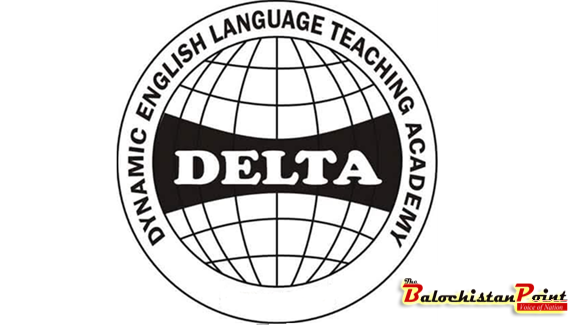 Delta is the change agent for Baloch nation

Dynamic English Language Teaching Academy is the only remarkable institution which tops the list of English Institutions across Balochistan. It was established by a nationalist and top educationist, Sir Barkat Ismail Baloch.

Delta is serving a pivotal role in the progress of Baloch nation. People of Makran were fleeing into darkness. They were unaware of the greatness and worth of education. Delta brought an educational revolution. If today many young women, men and children are known as great writers, speakers, presenters and competitors, doubtlessly it is because of Delta’s sincere and tireless struggles.

It is worthy to point out that DELTA has produced a host of professors, officers, lecturers, doctors, engineers, and also several Delta in achieved gold medals from the renowned universities of Pakistan. Specially, it is widely known for building good writers whose writing material are published in various online newspapers.

One of the greatest personality of Makran, Professor Barkat Iamail Baloch, is capable to be admired and saluted. He opened doors of education and success by establishing English Learning Center on 1st June of 2001. The institution has since then been a platform for the nation to the world beyond. Delta has truly been the change agent for those who were suffering from ignorance.

Delta’s vision has always been to bridge quality education in the region and provide an opportunity to those who were deprived of education. It provides the all effective study skills to the learners in order to improve their English language such as special focus on effective presentation skill, writing strength, developing reading habits, daily newspapers reading, practice testing, frequent speaking, books summarization and other ways to develop students’ skills. Delta is recognized as the future builder of the nation. Delta is simply a kick starter. It is the source of potential, support, guidance, motivation and encouragement.

Delta has continuously succeeded in achieving its goals. Its efforts and struggles bore fruits. It has always illuminated in the frontline among the English Institutions of Balochistan. Sir Barkat Ismail and Anayat K.B have devoted themselves and their time, not only to lead this particular institution but their efforts have been for their nation.