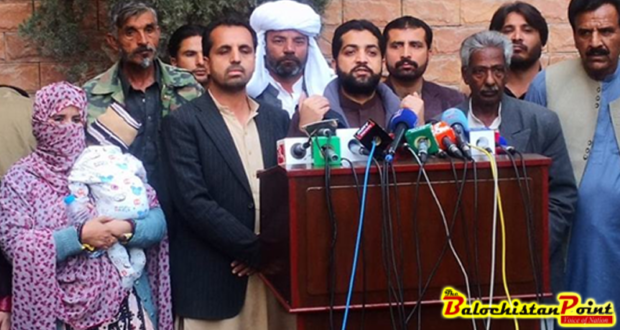 Democracy should not fail to resolve Baloch missing persons’ issue

Talking to the media Mir Zia Langove said that they did not want to do politics on the issue but to seek recovery of missing people. He added that it was responsibility of the provincial government to listen to grievances of missing persons’ relatives sitting in the camp for several days despite severe cold in Quetta.

Voice for Baloch Missing Persons (VBMP) claims missing of more than 15,000 people from Balochistan. The mentioned organization along with the relatives of missing persons has been campaigning for more than ten years. The long march in 2013, from Quetta to Karachi and then to Islamabad has been part of the peaceful protest, to get national and international attention.  The relatives of the Baloch missing persons’ demand judiciary that their loved ones must be produced before the court if they are involved in any kind of criminal activity.

A number of cases of the Baloch missing persons have been heard and the Balochistan High Court (BHC) has hundreds of pending petitions filed by the families of the dead and missing Baloch, but nothing has been done tangibly to pacify the victim families.

With the passage of time, this humanitarian crisis rather than being tackled with peace and confidence, has been deteriorating. Currently, a large number of sufferer families are protesting for the safe release of their family member. They carried a massive rally protest of 19th November in Quetta city, where apart from the family members of missing ones, a huge number of human rights activist, members of the civil society, lawyers, political leaders participated in the rally and pleaded Pakistani judiciary and the concerned authorities to recover forcefully abducted ones.

Advocates of democracy always link peace in Balochistan with safe recovery of Baloch missing persons. As a confidence building measures between Islamabad and Balochistan, Sardar Akhtar Mengal, the leader of the Balochistan National Party (BNP), in 2012, presented a six-point-plan before the Supreme Court of Pakistan.  Among the six points the safe recovery of Baloch missing persons was one of the points. Unfortunately, the concerned powers and judiciary showed no interest and the situation continued worsening.

Though the former Chief Minister Balochistan, Dr. Malik Baloch also linked peace in Balochistan with the safe release of missing persons and asserted that his government was committed to bring an end to recovery of mutilated dead bodies in the province, unfortunately he acknowledged before the media that his government could not accomplish success regarding the release of Baloch missing persons.

In the recent demands of Balochistan National Party to the government of Pakistan Tehrik Insaaf (PTI), the safe release of ‘enforced disappearance’ is one of the six points. Though, according to BNP leadership after the MOU signed between BNP and PTI, some missing persons were recovered, equally more Baloch have been abducted in different areas of Balochistan.

Pertaining the case of Baloch missing persons, the act goes against constitution of Pakistan. As the Article 9, and Article 10 clause (1) & (2) of the constitution of Pakistan disallow the illegal detention of a person and ask that the detained one to be produced before a Magistrate within a period of twenty-four hours of his or her arrest.

Balochistan Home Minister’s visit to protest camp is being considered a welcoming step towards resolving the matter. This time democracy should not fail to resolve Baloch missing persons’ issue. The provincial government and the PTI government, as a trust developing measure, must enact the MOU signed between BNP and PTI.

The alarming human rights abuse in Balochistan essentially be considered a great concern and concrete steps should be taken to bring an end the ‘enforced disappearance’ in Balochistan. It is high time to show interest in peaceful settlement of the issue and endure for safe release of forcefully abducted ones to let people observe the magic of democracy to see this human tragedy solved.

Yousaf Ajab Baloch is  a freelance journalist and editor-in-chief of The Balochistan Point. Follow Yousaf on Twitter @YousafAjab