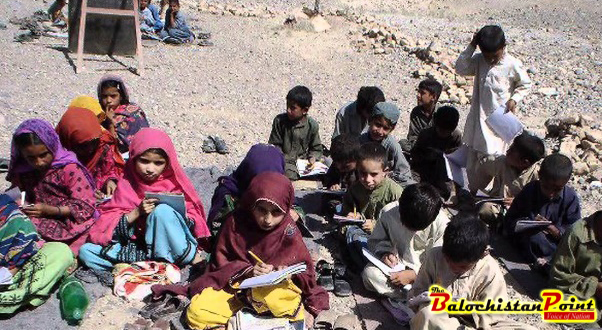 Discrimination against Balochistan – A big flaw of Islamabad

Balochistan is the 4rth largest province of Pakistan comprising of 347,190 sq kilometer, having the population of 13millions people. It has reservoirs of Natural resources, minerals, Sui gas hence playing an important role in development of Pakistan by contributing in fuel requirements. It has amazing tourist spots including Hanna lake, Hangol national park, Astola Island that also called Island of seven Hills. Despite these all beauties Balochistan is facing harsh conditions such as crises in Education, Media, poor Life style, Corruption, terrorism and encounter terrorism.

In reference to education system in Balochistan, according to surveys, a very depressing statistics comes. It has least literacy rate as compared to rest of Pakistan. Many tehsils of districts in Balochistan do not  have any primary school. 81% of Government schools lack proper infrastructure and basic facilities including furniture syllabus textbooks, functional toilets, consisting of only single room and single teacher. Teachers appointed in these schools are mostly ghost and even not graduated. They are just concerned with their pay. According to federal education statistics launched in 2014-2015 reported that 70% of children in Balochistan are deprived of education that are aged 5-16 years. A survey conducted by Annual statistics of Education reporter (ASER) in which testing of 65,335 children aged 3-16 years was Done, Out of which 43% were not able to read class two Urdu textbook. A large number of students cannot reach to Matriculation. This is the matter of huge concern.

Female literacy rate in Balochistan is very low. Some people believe that low female literacy rate is due to tribal system because they argue for their code of honor and dignity. But it is not the matter of fact; the main obstruction is lack of finance. It is common sense that every parent wants to provide education to their children but they are unable to   afford. Female colleges lack female lecture and transport system. Some NGO’s are receiving large amount of money for female education, but they are limited to Quetta not to rest of province so wasting time & Money. In other side of picture, some limited private schools and colleges are contributing for education but they are beyond the access of poor families.

Balochistan Government allocated 17% of provincial budget for education that is not enough to overcome educational crises in next couple of years. Although there are reserved seats in universities of Punjab for Balochistan and FATA students but they are not enough to fulfill 1% of educational needs for the rest of province. A painful moment comes here that why this province is dependent on Punjab. Balochistan just has 2 medical colleges as compared to the 55 of Punjab, 23, 4 and 17 of Sindh AKJ and KPK respectively.

No nation can flourish without quality education. From all of these it is difficult to determine bright future of Balochistan. A critical question comes here that why Federal government and Non-profit Organizations are not taking any serious step to undo appalling standards of education in province. There should be no excuse for this because future of youth and children of province depends on it.

Another big problem is media that is considered as voice of Nation. But in Balochistan media is not so actively involve where they can claim for their rights and needs. Even in past few years 1st online Newspaper ‘The Baloch Hal’ including others Daily Asa Ap, Daily Azadi and Balochistan Express were banned by country’s telecommunication authority.

People in province have to stay in Hunger camps in front of Supreme Court and high Court Quetta for the justice. That’s the Reason people in rest of provinces do not know the history of Balochistan, their culture and even unaware of the critical ups and downs in which Baloch people are passing through.

Country’s unbalanced Media only ratifies the violation of ethics of journalism. Natural gas supply from Punjab to Balochistan, finding of new Mineral, Missing of Filmstar  Meera’s  and her travel in rickshaw become leading breaking news in Electronic and print Media while human rights violations  remain unreported due to political reservations.

In Balochistan where poverty is at peak with 80 percent and there is no structure to cope with the basic health issues. In a press conference Dr. Ali Nisar Bugti revealed that every year 158 children out of thousand children die during birth due to malnutrition. Reports by Agha Khan University in a national survey depicted high rates of Malnutrition and Infant mortality that are very alarming as compared to the rest of the country. Province has 6 major hospital located in Quetta. However,  all lack proper machinery and medical equipments. In attack of 8th august 2016, lawyers who were critically injured bled into death due to lack of facilities in Quetta hospital. There is serious responsibility of Federal Government to develop proper hospitals in Rural & urban areas of province and allocate medical professionals.

Here it’s a matter of slight confusion that Sui gas is supplied to all cities of Punjab from Balochistan then why 80% of people in Balochistan are deprived of Sui gas facilities. They do not have facility to drink clean water. All the allocated Funds for development of Balochistan and FATA are being spent on Parks, Roads, and Metro-trains in Punjab. It is very sad to mention that in spite of being rich in Natural minerals and resources this province is so backward from rest of provinces because it is completely ignored by Federal Government.

A solution is, Pakistan Government should pay a serious attention to Balochistan. High Funds should be provided to overcome Educational crises. Industrial infrastructure should be developed in rural & urban areas as province is highly rich in Mineral resources. It will reduce the unemployment.

The sense of deprivation is high in Balochistan due to rights violation of by Federal Government. So this is serious time for Government officials to steps in otherwise we will loss this golden Province.

The writer is student of BS Biochemistry and Molecular Biology.

Published in The Balochistan Point on May 29, 2017