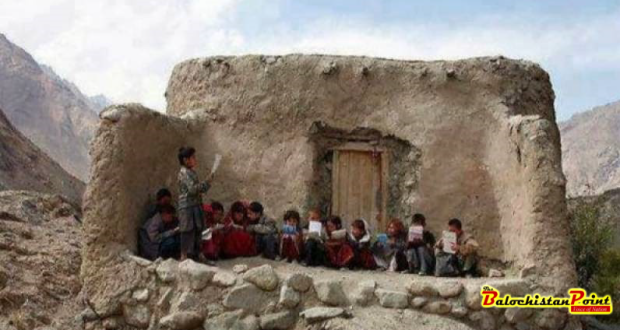 It is a fact that Balochistan is the richest province of Pakistan, replete with several mineral resources of gold, marble, oil, copper and natural gas. Unfortunately, still the province is deprived of all facilities of life   and suffering from several types of social, economical and political crises. However, today’s education is emerging as the most essential issue in the province where the state of education has always been in jeopardy, with low literacy rate and lack of access to schools of Balochistan.

In reality, out of 3.6 million children, only 1.3 million go to schools in the province and the remaining 2.3 million children are out of schools due to lack of basic infrastructure and facilities in most colleges and schools in the province. According to a report released by Alif Ailaan, an NGO working for the promotion of education that, there are 216 non functional schools which are existing in Balochistan among them 36 percent schools have no access to drinking water, 55 percent of schools are without any toilet and 56 percent have no electricity and more than 15 percent schools are without any buildings in the entire province.

Even in this modern era no improvement has been witnessed in the state of education for last 20 or 25 years. The ignorance of Baloch people by the governments of the time has been proved. It is a fact that, no nation can progress in the world without receiving proper attention by state in education sector.

Provision of all facilities, proper check and balance, visits by education officers in schools, colleges and universities can make a reading environment and plays a tremendous role for the motivation of students towards the education.

The richest province of Pakistan direly needs educational academies and education with well qualified teachers and all facilities The government of Pakistan needs to take notice of this deteriorating situation of education in Balochistan in order to save the education In the province.

Published in The Balochistan Point on March 6, 2016

2016-03-06
admin
Previous: Seminar on Opportunities, Issues and Solutions to CPEC held in Karachi
Next: Letter: Shortage of Water in Quetta