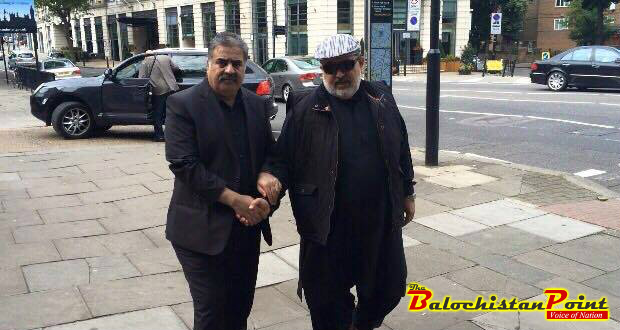 On August 15, Senior Minister of Balochistan government and Chief of Jhalawan, Nawab Sanaullah Zehri met Khan of Kalat Agha Suleman Dawood in London. Nawab Zehri tried to persuade Khan of Kalat to end his self-imposed exile in the Britain and return back to Pakistan. However, Khan of Kalat did not agree to return to Pakistan.

Khan clearly told Zehri that he does not have any authority to make a decision in this regard as Grand Baloch Jirga, consisting of heads of all key Baloch clans, possesses decision making power about his return.

Khan of Kalat Mir Suleman Dawood Khan Ahmedzai is the 35th leader of Kalat royal family. He became the head of his royal family after the death of his father Mir Dawood Jan. Suleman is the grandson of Mir Ahmed Yar Khan, who was the last Khan of Kalat before partition of India. Ahmed Yar Khan was the President of the Council of Balochistan States Union (1952-55) which comprised of states of Kalat, Kharan, Lasbela and Makran. Suleman took interest in politics after August 2006, before Nawab Bugti’s killing he did not have any political background.

In 2006, a grand Baloch Jirga sent Khan of Kalat abroad to present case of Balochistan in International Court of Justice.

After the killing of prominent Baloch nationalist leader Nawab Akbar Khan Bugti in 2006, law and order situation in Balochistan deteriorated to a greater extent. To discuss the security and political situation of the region, Suleman invited all key Baloch clan elders in a Jirga. The Jirga then asked Ahmedzai to travel abroad to take the case of Balochistan to International Court of Justice (ICJ). Since then, Suleman has been living in self-exile in Britain. However, after eight years, federal government has started efforts to bring the Khan back to the country in order to control security situation in Balochistan

Dr Shama Ishaq, a member of Balochistan assembly from ruling National Party (NP), while hailing the meeting between Zehri and the Khan, said that it is good sign to resolve the decade-old insurgency. “Both federal and provincial governments are on same page and mutually going forward to resolve the issue through negotiations,” she told The Balochistan Point.

Politicians from the ruling coalition in the province are satisfied with Suleman’s response. “In one meeting, we will not reach on a solution. The process of negotiation has started and we hope that the government would be successful in bringing him back to the country and end his self-imposed exile,” Shama maintained.

However, political parties in opposition in Balochistan assembly think differently. Agha Hassan Baloch, the Balochistan National Party’s (BNP) central secretary information, said that meeting with the individuals is not the solution of the issue. “The insurgency in the region is political issue and the Khan is a tribal chieftain,” Baloch told The Balochistan Point. He maintained that if the government is seriously thinking to resolve the Balochistan issue, then they should immediately change their policies in the province, which could establish trust between the political parties.

If government is serious in resolving the Balochistan issue, then they should immediately change their policies in the province – Agha Hassan Baloch

Commenting on Zehri-Suleman meeting in London, Baloch said that there is a race between few politicians for the chief minister’s slot and Zehri is one of them. “Zehri is not sincere with Balochistan issue. He has just been trying to satisfy the federal government for the chief minister ship in second half of this Assembly”, he maintained.

Media reports suggest that there was an agreement between the NP and the Pakistan Muslim League-Nawaz (PML-N), two coalition partners in Balochistan government, to share the office of CM for two and half years each.

Mir Muhamamd Ali Talpur, a political expert analyzing Balochistan crisis very closely, said that the Khan no longer enjoys the influence that his elders did. “So even if  the Khan returns,  it will not, in any way, change the insurgency situation in Balochistan; though he too may arrange the lucrative rent a crowd surrenders that others are doing to prove that his return has triggered a change”, Talpur told Balochistan Point.

Dr Malik told media that Khan’s return to home is not a race for the post of Chief Minister ship between PML-N and NP. “We are trying to persuade him to return home, where he will play his role in mass politics”, he said.

Although the Khan does not have any role in the armed struggle, analysts believe that his return will still boost Pakistan’s confidence and claims about making some progress in Balochistan towards reconciliation.  Malik Siraj Akbar, a U.S based analyst who authored “The Redefined Dimensions of Baloch Nationalist Movement”, said that Khan’s return will be a symbolic victory for Islamabad and they will use the event to tell Baloch activists that they are only being used by tribal chiefs for their vested interests.

Baloch Republican Party’s chief Brahamdagh Bugti showed indication to negotiate with Pakistani government to resolve Balochistan’s matters through political ways. He expressed his desire in an Interview with the BBC Urdu service. He said “we are political people and believe in talks, for the sake of our people I will talk with government and if Baloch people agree I will withdraw from the struggle of free Balochistan.”

Chief minister Balochistan Dr Malik Baloch said in a interview published in a local news paper, “we are trying our best to accept most of Brahamdagh Bugti’s conditions, soon we will start talks with Brahamdagh Bugti and we are hopeful that he will come back to country and take part in the mainstream politics for the sake of people of Balochistan”.

We are hopeful that Brahamdagh Bugti will return and take part in the mainstream politics for the sake of people of Balochistan – Dr. Malik Baloch

In June, Balochistan’s Apex Committee offered that all Baloch youth who will lay down their arms will be compensated by government. It was announced that for each fighter Rs 0.5 million and for the commanders Rs 1 million to Rs 1.5 million would be paid if they surrendered. According a report, 650 Baloch insurgents have surrendered so far.

Zehri’s meeting with Khan of Kalat has resulted in a domino effect in the Balochistan’s politics.

Author is a freelance journalist and researcher who mainly focus on politics and culture. He can be reached at HDilmurad@Yahoo.com. Follow him on Twitter: @HDilmrad

Published in The Balochistan Point on August 31, 2015