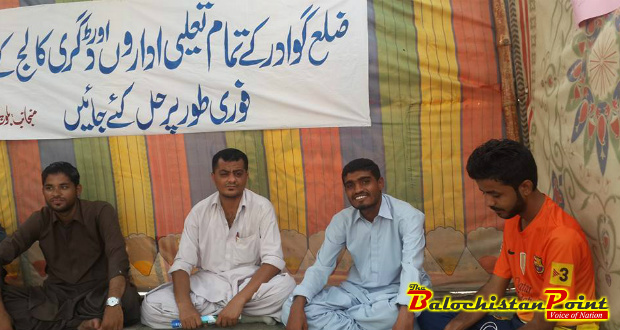 Gwadar – Students of Gwadar are protesting outside Gwadar Press club for last three days against educational problems in the district.

Students are protesting against shortage of teachers in Gwadar institutes and general plight of the entire educational system.

Protestors blame lack of seriousness of Balochistan government to be the main reason behind educational problems of the province.

“Educational standards in Gwadar are deteriorating because ruling and opposition parties are not taking the issue of education very seriously,” Khalil Murad, a protestor told Balochistan Point. “No one is interested in solving problem of lack of teachers in Gwadar,” He added.

“Member of provincial assembly from Gwadar is exploiting the scholarship funds and government is only deceiving us in the name of development,” lamented Muhammad Khan another protestor while talking to Balochistan Point.

Mr. Khan continued, “Gwadar is center of attention in the world but we are deprived of basic facilities such as quality education.”

“Provincial government has destroyed the educational system of Gwadar and the concerned authorities are not doing their duties in a proper way,” Ismail Omar, a protestor, told Balochistan Point.

Students have appealed from government of Balochistan to take the issue of education in Gwadar seriously and let the people be educated so that they can develop their own region.

Published in The Balochistan Point on August 31, 2015