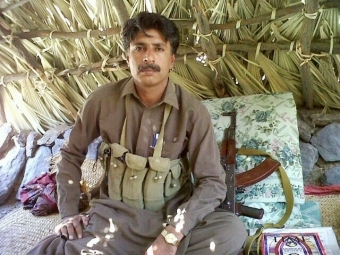 KARACHI: An impasse looms large over the relief effort in Balochistan’s earthquake-devastated region – an area known to be a hotbed of Baloch rebels – which has already resulted in mushrooming clashes in the region. However, a top commander has offered a way forward through the mistrust between rebels and security forces: Let the relief effort be handled by private or international organisations.

Talking to The Express Tribune from an undisclosed location, Dr Allah Nazar, the purported chief of the Balochistan Liberation Front (BLF), alleged that the army’s large deployment in the area was a cover for conducting operations against the rebels, which, he claimed, had been under way for the past two days. This charge was strongly denied by military sources.

Dr Nazar, a former student leader who is now often referred to as Balochistan’s most wanted rebel and is the most widely-respected leader among various separatist groups, said that the workers of private, non-government organisations or international bodies, such as the United Nations, would be welcomed by the rebels. They have nothing to fear from the side of the rebels, he assured, adding that there will be no attacks on civilian convoys. A military official in Awaran also confirmed that the rebels are only attacking security forces and not civilians.

Another military source said that up to 1,500 troops have been deployed to the area for relief work. But Dr Nazar, who has been underground for the past seven years, held that the huge aerial and ground deployment by the army was to crack down on rebel elements under the garb of relief efforts. “They are taking advantage of a human tragedy,” he said. “Their presence is unacceptable.” Referring to the attack on military helicopters, Dr Nazar claimed that the choppers were engaged because they were launching an offensive on the bases of rebel elements along with ground troops. The helicopters, he said, were also surveying areas that were known to be sympathetic to the rebels instead of hovering above the devastated areas.

Military sources confirmed the engagement between rebels and the army, but held that it was retaliatory fire by the security forces. The military source also rubbished the claims made by Dr Nazar about an offensive by security forces. “One attack took place [on Friday] at 1030 hours and the other at 1330 hours,” they said, adding that there was also fire exchanged between rebels and ground troops in the Buzdad area. The attack on the military helicopter took place in the Mashkey area.

In any case, Dr Nazar, who, unlike the self-exiled leaders of other rebel groups, operates from the ground in Balochistan, said the ‘movement’ rejects the army presence in the region saying that they had ulterior motives. “They will tell the world: Look how bad the rebels are… they are attacking relief efforts,” he said, but added that the army was taking advantage of the affected people’s desperation.

As proof of his claims of the army’s hidden agenda, he questioned why no private aid or workers were being allowed through, or facilitated, and pointed out that, if they were allowed through, they were restricted and warned against travelling to areas other than the ones chosen by the security forces. Private individuals or international workers will not be attacked he said, adding that, conversely, they would try their best to give them security. A military source refused to comment on this proposition. A military official in Awaran said that aid was being dropped by helicopters to ‘inaccessible areas’.

Dr Nazar claimed that dozens of relief-carrying vehicles were being stopped between Quetta and Khuzdar, and the military was not allowing any private efforts and insisting that they will do it themselves. “Sixty-five thousand houses have been destroyed, there are over a 1,000 dead,” he said. “This is a human tragedy of massive proportions. The area’s entire infrastructure and economy has collapsed.”

Travellers to Awaran on Friday confirmed that entry and movement in the region was being heavily monitored and checked. It was also added that a lot of aid was yet to move forward into Balochistan from the office of the deputy commissioner, where many relief trucks stood parked. It was unclear why they had not moved forward yet. They also narrated incidents of aid convoys being stoned by villagers, and added that there was an air of scepticism surrounding the role of the security forces in the area. ( Courtesy: Express Tribune )

Republished in The Balochistan Point  on September 28, 2013