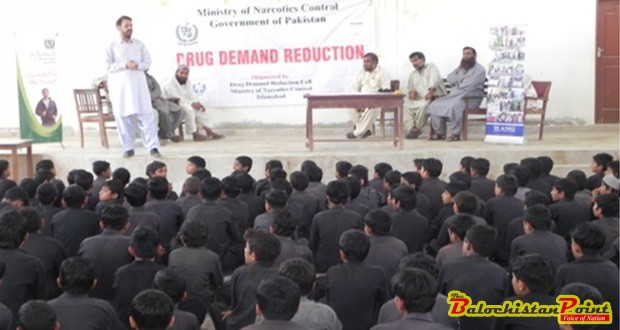 Speakers emphasized these activities are important because Balochistan Province shares its boundaries with Hilamand, Kandahar, Nimroz and Zabul provinces of Afghanistan which are producers of majority of illicit opiates. The province is also one of major transit route for these drugs due to which the numbers of drug users are also very high and unfortunately, according to the Report of Drug Use in Pakistan, 2013, Balochistan has high opiate use prevalence.

Awareness about drugs abuse needs to be focused on youth as they may easily get trapped into the trap of addiction said the Deputy Director. The awareness session aimed at familiarizing the youth with the consequences of drug which not only disturbs the health and psychological fitness but also affects the whole family. Speakers emphasized the need to avoid being pampered by Peer-members and stop experimenting with the drug for fun.

Abdul Baseer Khan, Deputy Director DDRC, highlighted the consequences of the Drug use that aim to develop cognitive abilities in the youth that might help in saving them from trying the Drugs for fun and pain amelioration.

A large number of students attended the session.

Published in The Balochistan Point on April 21, 2015