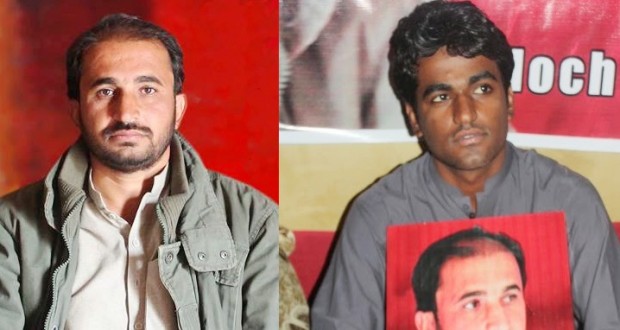 According to the leaders of Baloch Students Organization-Azad, the Chairman of the organization Zahid Baloch was picked up in Quetta on March 18.  The Baloch students have expressed serious concern about the well-being of Zahid Baloch and fear of his extra judicially murder. Lateef Johar, one of the Central Committee Members of BSO-Azad on April 22, announced “Hunger Strike Till Death” at Karachi Press Club to protest the enforced abduction of Zahid Baloch. Now the 16 days have passed and Lateef’s condition is deteriorating with every passing moment.

The Human Rights Commission of Pakistan (HRCP) has also expressed serious concerns at the disappearance of Zahid Baloch and demanded his safe and immediate release. In a statement on Tuesday, the Commission said: “HRCP is seriously concerned over the case of Zahid Baloch who was picked up in Quetta on March 18 by plainclothesmen believed to be from security agencies. Even more disturbing is his unacknowledged detention for over a month now.”

In its recent statement Human Rights Commission of Pakistan states, “HRCP is extremely worried about risks to Zahid’s life and wellbeing in custody and urges the authorities that his detention must be immediately acknowledged and his release ordered. HRCP also demands that he must not be mistreated or tortured in custody.”

“We have long advocated that anyone accused of contravening of any law must be tried in a court of law with due process rights and must not be made to disappear. HRCP also thinks it is of vital importance that those who indulge in disappearing people should be tried without delay, again with all due process rights. HRCP also wants to humbly suggest to anyone who wishes to strike at impunity for the perpetrators that it might be useful to record the testimony of several witnesses who were present when Zahid was picked up.”

Having seen the fate of hundreds of Baloch missing persons, where more than 1500 have been turned into dead bodies and hundreds more are still missing, this is crystal clear that lives of Zahid Baloch and Lateef Johar are at danger. In spite of Lateef Johar’s declining health, the state officials maintain absolute silence regarding the illegal abduction of BSO-Azad Chairman. Doctors have been closely monitoring Lateef Johar’s deteriorating condition.  Lateef has also lost his weight but he remains determined to continue his hunger strike until death unless BSO-Azad Chairman Zahid Baloch is released. On the other hand, keeping in view the past experience and recovery of bullet riddled dead bodies of Baloch students and their leaders, Zahid Baloch’s life is danger.

The lives of Lateef, Zahid Baloch and other missing persons can be saved if the human rights organizations in Pakistan, International human rights champions, Media, Political parties, Baloch nationalists and judiciary launch protests and start pressure campaigns. As   the National Party and PML-N have already failed in Balochistan to pacify Baloch by positive measures rather than imposing power, since inception of PML-N government whisking of political workers and throwing their dead bodies have been increased. Therefore, the Baloch nationalists parties, students organizations, Sindhi nationalists always demand human rights organizations for taking notice of killing innocent people and transparent inquiry in their murders. However, the government and the responsible authorities still do not seem serious pertaining human rights abuse in Balochistan. If the situation remains same it will create more human rights catastrophes in the already backward and restive land of Balochistan.

Published in the Balochistan Point on May 06, 2014