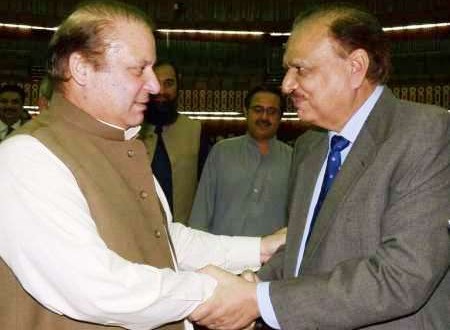 President Mamnoon Hussain on Tuesday at his arrival in Quetta said that the federal government was putting serious efforts to resolve Balochistan issues on priority. He also said that   positive changes could be   witnessed in Balochistan. He added that all the problems faced by Balochistan would be resolved and the situation would improve soon. The president, along with Federal Minister for States and Frontier Regions, General (retd) Abdul Qadir Baloch, Senior Balochistan Minister for Works and Communications and PML-N Balochistan chapter chief, Sardar Sanaullah Khan Zehri had arrived at Quetta International Airport.

Contrary to this, Sardar Akhtar Mengal the chief of Balochistan National Party (BNP), on Saturday criticized so called seriousness of government   and threatened to resign from national and provincial assemblies if the incidents of forced disappearances and killings of Baloch youth continued. He shared his dissatisfaction with media over the inordinate delay in resolving issues faced by the province.

According to Sardar Akhtar Mengal the PML (N) had assured for restoration of peace in the in Balochistan  before coming into power  but  the dumping of mutilated bodies still continued. In his resent meeting to Prime Minister Mr. Mengal was assured that the ongoing year would be the year of political and economic change for the province.

The ground realities prove that government of Pakistan has failed to make ways for talks with Baloch nationalists and reduce human rights abuse in Balochistan because the killing of Baloch youth at the hands of paramilitary forces are not halted. The situation in Balochistan has not improved despite change of government. Baloch people are still being abducted and recoveries of their bullet riddled bodies are continued even now mass graves have started surfacing. However, the PML (N) government does not seem to be serious to resolve Balochistan issue. Only some political parties in Balochistan are benefiting from the government applying nepotism and favoritism but the common masses are still suffering.

The recent military operations in the civilian populations and killing of innocent Baloch women and children is worsening the situation in Balochistan. If the government and establishment are serious so they should end their irresponsible claims regarding Baloch issue and take tangible efforts  to make  confidence building measures.