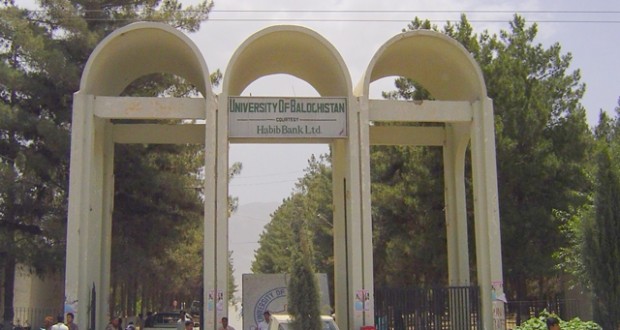 Currently the University of Balochistan is confronting a number of problems and the major one of them is financial issue. According to the academic staff and financial experts of the university, the biggest public sector institution in Balochistan has reached the verge to be unable to pay the salaries of academic and lower staff. Senior staff member say that scarcity   of funds has become the most challenging matter for the management.

It is said that there is shortage of funds from Higher Education Commission (HEC).  The fifty percent of the grant allocated by HEC has been cut; this has caused a great suffering for the staff. The monthly salary of lecturers and other working staff of the university are approximately 80 million rupees, which is always delayed due to the shortage of funds.

The senior members of Academic Staff Association assert, “The major cause behind this mess is appointment of unnecessary staff in the University of Balochistan since all Vice Chancellors in past were appointed on political or on the bases of favoritism; therefore, they hired a number of employees without requisition which has caused a burden on University of Balochistan and now the institution is having staff out of its requirement.”   “The HEC would grant on quarter bases, later it was on monthly bases but now it also takes months for release of fund.”Says Secretary General of Academic staff Association

The role of Vice Chancellor and Governor of Balochistan has never been appreciative to resolve these gaps, they being the main figures, have not been able to do any remarkable moves regarding the challenges. Due to their lack of interest the UoB has come to undergo lack of money. The Governor of Balochistan being the Chancellor should have done its job to deal with the problems; unfortunately matters have not been tackled sincerely.

The appointment of unconcerned persons in university of Balochistan is considered breakdown of the system and quality management .To cope with this problem it is said, “This burden should be dismounted because the burden of retired persons badly affects the budget of UoB. Rather than hiring 70 years old retired persons, institution’s own professionals should be promoted and trained to perform their work. The appointment of irrelevant persons is no doubt the failure of system and management utterly.

This should be taken seriously that according to 18 amendments, after 2013 or 2014 provincial government is responsible to fund University of Balochistan and after 2013 HEC will not be allocating for University onward. University of Balochistan is the biggest Public Sector institution in Balochistan. The university requires 280 million rupees to overcome the financial crisis. The Vice Chancellor being executive of university must make efforts to overcome financial crises. The authorities should initiate process of reshuffling as for the years many positions are filled by the people who are causing deterioration of the situation but they do not take it serious and this  will mitigate some reason of the current crisis.

Conversely, there is a great need of the shuffling in the academy to ensure transparency. Fresh candidates with highly oriented experiences should be given opportunity for the services and it comes under the duty of VC of UoB to take initiatives for overcoming the appalling crises, the UoB cannot run unless there is trust in the people who are able to perform.

Published in The Balochistan Point on July 9,2013

2013-07-09
admin
Previous: “The innocent victims of Lyari”
Next: The barbarity of perpetrators’ justice