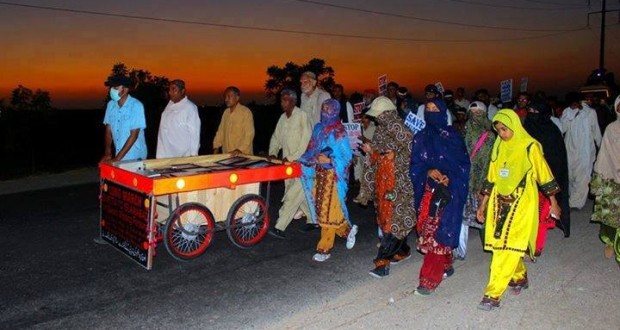 The Voice for Baloch Missing Persons (VBMP) has started the second phase of its long march from Karachi to Islamabad from 13 December, for the recovery of Baloch missing person who have been allegedly disappeared by Military and intelligence agencies of the state. Prior to this the first phase of this long march was launched on 27 October and ended on 26 November at Karachi press club. The marchers walked on foot 750 kilometers. The second phase of this long march to federal capitol Islamabad will cover distance of approximately 1600 kilometers. Vice Chairman of the Voice for Baloch Missing Persons  (VBMP), Mama Qadeer Baloch is determined and said  that he   would  continue his  movement and long march till the recovery of last missing person of Balochistan.

It was hoped that first phase of long march would be result oriented and successful to pressurize responsible authorities   for the safe recovery of Baloch missing persons, however, the participants not only received death threats but also no Human Rights Organization morally supported them. The main stream media did not cover the long march as well. While the long march was on its way to Karachi   number of people were also disappeared in Balochistan and news of recovering bullet riddled dead bodies of Baloch people appeared in media.

It remained a great support for the long march when some international media organizations covered the protest even than the responsible authorizes have buried their head in sand towards this burning issue of Baluchistan. Though   for few days the Supreme Court looked busy in investigating cases of missing people in Balochistan, issuing warnings to the government to recover these people, yet these all remained ineffective as it has been for last five years.

Having seen the international attention of the long march and hunger strike in Karachi some politicians, human rights activists, ministers, including the Minister of Defense, visited their camp and assured that missing Baloch would be recovered very shortly but these moves were only for photo session.

The second phase of the long march by Voice for Baloch Missing Persons (VBMP) shows apathy of government and rule of intelligence agencies in Balochistan. As the current chief minister of Balochistan and Senator Hasil Khan Bizenjo have recently conceded their failure in the recovery of Baloch missing persons and  say that National Party has only been granted access to power but no actual political authority to make decisions.

The candid statements of governing party leaders  elucidate that still Balochistan is under the military rule and there is no value of the Baloch political leadership and judiciary. It is sure enough, as long as the issue of abducted Baloch is being ignored in Pakistan; it is gaining international sympathy in the media and being internationalized.

Literally, the tacit role of media in Pakistan, recovery of decomposed dead bodies of Baloch missing persons, forcefully disappearance of people and VBMP’s long march prove that issue has not remained Pakistan’s internal matter but a challenge for the defenders of human rights and international human rights organizations. The current scenario in Balochistan demands intervention of United Nations, Amnesty International and Human Rights Watch to deal with this crisis so that relatives of Baloch missing persons have any hope for the safe recovery of their loved ones.

Published in The  Balochistan Point on December 17, 2013

2013-12-17
admin
Previous: Temperature tale of Quetta
Next: A Blatant Campaign of Ethnic Cleansing