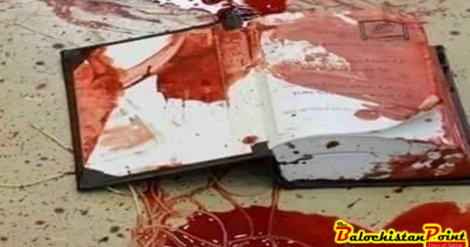 A suicide bomber killed at least 70 people including lawyers, media men, civilians and injured more than a hundred at the Civil Hospital in Quetta on 8th August, blast at Civil Hospital came hours after unidentified gunmen killed president of Balochistan Bar Association Advocate Bilal Anwar Kasi in the provincial capital following which lawyers had brought his body to the hospital.

According to the Eye witnesses a loud explosion was heard as lawyers and journalists had gathered at the emergency department where Kasi’s body was brought for autopsy. Most of the dead and injured are lawyers, and include police officials, journalists and doctors. Bomb Disposal Squad officials also confirmed that explosion was a suicide bombing. Police said that eight kilograms of explosive material along with ball bearings were also used in the bomb blast attack. Jamaatul Aharar, a faction of Tehreek-e-Taliban Pakistan has claimed the responsibility and  vowed more attacks “until the imposition of an Islamic system in Pakistan.

Soon after the attack, Prime Minister Nawaz Sharif and Chief of Army staff General Raheel Sharif reached the city and visited the hospital to take stock of the situation. Chief of Army Staff (COAS) General Raheel Sharif on arrived at Civil Hospital Quetta to enquire after health of the persons injured in the suicide blast. COAS said that the bombing was an attack on the China-Pakistan Economic Corridor (CPEC). General Raheel was accompanied by Commander of the Southern Command Lt-Gen Amir Riaz who briefed him about the incident. Later, following a high-level security meeting, COAS asked spooks to commence a combing operation against terrorists.

Balochistan Home Minister Sarfaraz Bugti termed the incident a security laps and said that he was having that personally investigated. Chief Minister Sanaullah Zehri claimed that the blast was a suicide attack and that Indian intelligence agency RAW was behind terrorist activities in Balochistan.

The bloody attack on lawyers in Balochistan has caused loss of a entire educated generation. The slain lawyers include Baz Muhammad Kakar, Adnan Kasi, Arbab Gul Zareen, Sangta Jamldini,Chakar Rind and many others others. Journalists have once again become target of the suicide blast, as Mehmood Hamdard Cameraman of Dawn News and Shehzad Khan Cameraman of Aaj Tv lost their lives while Fareedullah reporter of Dunya News sustained injuries. More than 40 journalists have been killed in last seven years in Balochistan.

Undoubtedly, the Quetta massacre is failure of security once again, since such attacks have been taking place. Prior to this incident on 8 August 2013, a suicide bomber exploded at a funeral being held for a police officer. The attacker  killed as many as thirty-one people and injured over fifty people. It was also believed to be an attack of Taliban. Another attack was carried out at Bolan Medical College Teaching Hospital following terrorist attack on Sardar Bahadur Khan Women University and another one at the snooker club in Marriabad area.

It is high time government and law enforcement agencies should stop blaming game and take tangible measure to overcome terrorism activities being continued by Taliban and sectarian organizations in Balochistan. So far, the shallow policies of government against talibanisation in Balochistan have not been result oriented; they need to review their policies and actions against elements spreading carnage in most underdeveloped province of Balochistan.

Published in The Balochistan Point on August 10, 2016