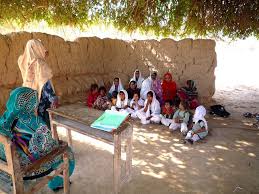 The education sector in Balochistan is in a sorry state while the government is only relying on rhetorical promises about improving the situation.Independent studies carried out about the scale of the problem paint an abysmal picture.

Out of 3.6 million,only 1.3 million children go to school in Balochistan.A staggering number of 7,300 teaching positions are still vacant in the province, out of which 2,200 are those of secondary schools. Pakistan Social and Living Measurement Survey (2011-12)states that Balochistan has a literacy rate of 46% as compared to 58% in the entire country. The Annual Status of Education Report (ASER) 2013 makes shocking revelations about the state of education in Balochistan. According to this report; 71 percent schools in Balochistan have no access to drinking water while there is no toilet facility in 83% of the schools.This suggests that the already established educational institutes are in dire need of funding from the provincial exchequer.

In the annual budget for fiscal year 2014-15, the education budget has been increased to 26%. The government has announced the establishment of a number of schools, colleges and a few university campuses. While these efforts of the Balochistan government are commendable but the bitter truth is that they alone will not solve the major problems faced by the education sector. The existing educational institutes face a lot of problems, as stated above.There is no significant allocation of funds by the government to address those problems. The new educational institutes will take years to complete and even after that their future is subject to release of funds by forthcoming governments. In the present circumstances the first priority should be to cater to the needs of existing educational establishments rather than diverting funds to a number of new establishments.

The current political leadership of Balochistan led by Dr. Abdul Malik Baloch has completely failed in bringing positive changes to the educational landscape of Balochistan. Just like schools, there are also a lot of unfilled vacancies in the colleges in Balochistan. At the beginning of this year, the Balochistan government advertised 674 positions of lecturers on the district quota basis. This was followed by political controversies on ethnic basis and Dr. Malikhad to cancel the recruitment on these vacancies due to pressure from its main coalition partner. Apart from that, 250 vacancies in technical education which were in the last stages of recruitment were cancelled at the last moment due to petty politics. On the other hand, ruling coalition in Balochistan has not failed to miss a single opportunity to appoint their men at important positions. Take for example, 20thof May was the last date for submitting applications for the position of Principle of University Law College. Over efficient ministers in government appointed their own man on the 10thof May. One of the cabinet members appointed his daughter a lecturer at the University of Balochistan bypassing all established rules. These are just a few examples of the seriousness of the present government in solving the educational crisis in the province.
Moreover, political patronage of teaching staff along with the lack of vigilance is also a main problem. Many teachers don’t go to the schools and collect their salaries while resting at home. The exact number of such teachers is not known, but one can safely say that they make a significant chunk of the entire teaching staff. The educational inspectors who are supposed to make unannounced visits to check the attendance of teachers, either take bribes or don’t bother to travel to schools which are far away from district headquarters. Some teachers and headmasters, owing to their connections with government ministers and members of provincial assemblies, do not care to perform their duties. Even the top most officials of education department cannot dare to take action against such crooked teachers. The incumbent government has yet to take any concrete measure to ensure that all teachers perform their duties. It has also not succeeded in effectively instructing members of the provincial assembly to stop patronizing the corrupt teachers.

In Panjgur district of Balochistan, an unknown extremist organization called Tanzeem-ul-Islami-ul-Furqanhas threatened all girls’institutes to either shut down or face consequences.

Since May of this year, girls’ education has been facing a challenge yet to be addressed by the government. In Panjgur district of Balochistan, an unknown extremist organization called Tanzeem-ul-Islami-ul-Furqanhas threatened all girls’ institutes to either shut down or face consequences.After a few days, the extremist organization attacked the vehicle carrying staff of a co-educational institute. This led to the closure of all private and girls’ schools in Panjgur district, which are closed till to date. Tanzeem-ul-Islami-ul-Furqan has been rightly dubbed as Boko Haram of Balochistan. Panjgur district is adjacent to Kech district, which is also the hometown of Chief Minister Dr. Abdul Malik. He has only given political statements and failed to take action to provide security to the schools so that they can resume imparting education. If a chief minister cannot solve a grave crisis close to his hometown, then it would be unwise to expect from him any resolution of bigger educational problems all over Balochistan.

According to the budget, the government’s focus is towards construction of several new educational institutes. The reason is obvious because construction projects are always lucrative for politicians due to the possibility of huge kickbacks. Rather than looking for opportunities to earn some commission, government officials should take practical and concrete steps to initiate the process of solving existing education problems because these problems cannot be solved overnight. Firstly, the government should ensure that educational inspectors are effectively carrying out their job and inspecting every school in the province. Secondly, all government members of provincial assembly should immediately cease patronage of corrupt educational staff and other officials. Thirdly, the government should make recruitment on 7,300 vacancies in the educational sector. This can only be done if establishment of some less important newly proposed institutes is postponed for the time being. Lastly, completely eliminating favoritism, nepotism and ethnic bias and then formulating a long term educational policy for the province. All these steps require strong political will which current government has failed to manifest so far.

Published in the Balochistan Point on June 29, 2014