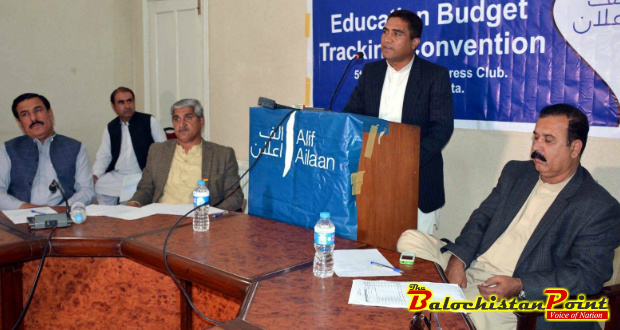 Quetta: Educational Problems of Balochistan were discussed in a convention which was supposed to track education budget of Quetta District.

Majority of the participants discussed the general educational issues rather than discussing the education budget of Quetta.

Addressing the seminar, Nasrullah Zeeray Member of Provincial Assembly from Pashtunkhwa Milli Awami Party, boasted about the steps taken by government to promote education in the province.

He said that Balochistan government has for the first time formulated Balochistan education Sector Plan which is a revolutionary step.

He revealed that Balochistan governments will recruit 3,200 teachers in the year 2016 through NTS tests.

Munir Nodezai, Additional Director Schools, apprised the participants of the convention about the steps taken by government for promotion of education.

“Previously administration and financial powers in education department were centralized and this government delegated them to districts,” said Mr. Nodezai.

Explaining the policy of ANP on education, Mr. Nasser added, “Our party is totally against class system in education.”

Mr. Jattak lamented that education is the most important department in provincial government and for last 2 and half years it did not have a minister.

“Increase in budget of education is commendable but budgetary increase alone is not sufficient to address the problems,” said Raza Wakeel, Senior Vice President of Hazara Democratic Party.

Convention was concluded on the note that more efforts are required for all stakeholders to promote education without discussing the district education budget.