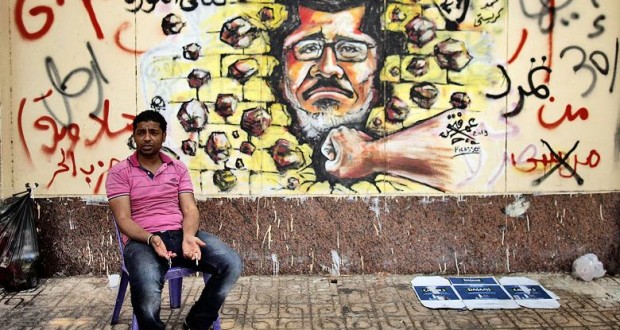 The ouster of Egyptian President Mohammed Mursi, following four days of nationwide mass protests, has placed power in the hands of a military junta which is committed to the defense of the economic interests of the country’s ruling class and to the geo-political aims of American imperialism.

The removal of the hated Mursi regime has evoked jubilation. However sincere and deeply felt this sentiment may be, the fact is that Mursi’s overthrow has placed the army, not the masses, in power. None of the essential demands that motivated the mass protests—for decent jobs, livable wages, adequate social services, and democratic rights—will be met by the military regime.

The military has intervened for one overriding purpose: to pre-empt and suppress the growing political movement of the Egyptian working class. The coalition government that it unveiled last night is in no way a genuine expression of the democratic strivings of the working class. Rather, the new ruling structure is a sinister coalition of reactionary forces, which includes long-time henchmen of Hosni Mubarak, various Islamic politicians, and several liberal politicians with close connections to the US-based International Monetary Fund. None of the individuals and organizations has either a mass social base or advances a popular social program.

After seizing control of Muslim Brotherhood (MB) television stations and reportedly arresting Mursi, the head of the military junta, General Abdul Fatah Khalil Al-Sisi, unveiled a political “road map” that includes the immediate suspension of the constitution and the formation of a so-called “national technocratic” government.

The term “technocratic” is being bandied about to evoke the image of politically neutral experts who stand above partisan class interests. In reality, the so-called “technocrats” are steeped in the reactionary nostrums of the international banks.

Each one of these figures was selected to create the impression of broad support for the new regime across key political and religious divides in Egypt.

The army chose the head of the Supreme Constitutional Court, Adly Mansour, as president. Mohamed ElBaradei has been named prime minister. There are vague promises of early elections.

Mansour had long ties to the old Mubarak regime. ElBaradei, who worked for years as an official of the United Nations, has close ties to the economic and foreign policy establishment of the United States. ElBaradei supports austerity measures worked out in talks with the International Monetary Fund (IMF), which favors cuts to subsidies for basic goods such as grain and fuel.

In the political maneuvers that set the stage for the military coup, a key role has been played by the Tamarod coalition. This is a thoroughly pro-capitalist political movement. Founded at the end of April as a campaign to collect signatures against Mursi, it quickly became a rallying point for a range of opposition parties—liberal, Islamist and pseudo-left alike—and remnants of the former Mubarak regime who oppose the MB. Its supporters include El Baradei’s NSF, the Islamist Strong Egypt Party of former MB member Abdel Moneim Aboul Fotouh, the April 6 Youth Movement, and the pseudo-left Revolutionary Socialists (RS). The movement also accepted an endorsement from General Ahmed Shafiq, the last prime minister under Mubarak.

Although the United States had been backing Mursi, the Obama administration entered into talks with the Egyptian military once it became clear that the regime could not be saved. The Egyptian army launched the coup after intensive discussions with General Martin Dempsey, the chairman of the US Joint Chiefs of Staff.

In a statement yesterday evening, US President Barack Obama backed the removal of Mursi, while taking care to avoid the word “coup.” Using vague language that imposed no restraints on the military, Obama sanctimoniously requested that the army “move quickly and responsibly to return full authority back to a democratically elected civilian government as soon as possible, through an inclusive and transparent process.”

Once again, the Revolutionary Socialists—the most prominent of the pseudo-left groups in Egypt—has adapted its rhetoric to the political maneuvers of the bourgeoisie. In February 2011, the RS backed the military junta that came to power after Mubarak’s ouster. In 2012, as the military faced mounting popular opposition, they hailed Mursi’s election as a victory for the revolution. Now that the working class has moved into struggle against Mursi and the MB, they have aligned themselves with a coup to bring back the army and elements of the old Mubarak regime into power.

The only consistent element of the RS’s reactionary politics has been their opposition to the emergence of an independent political movement of the working class. They speak for sections of the upper middle class, closely connected to the Egyptian bourgeois establishment and its imperialist backers.  (Courtesy: WSWS.org)