Turbat – Electricity problems in Makran division have exacerbated over the course of last few days, learnt The Balochistan Point.

Yesterday, 4 high power transmission pylons were uprooted by storm in the Mand area of district Kech which resulted in cutting off electricity supply to major portion of Makran division.

“I have learnt from sources in Quetta Electricity Supply Company (QESCO) that it would take a week to restore the fallen electricity pylons,” Ejaz Ahmad Advocate, a resident of Turbat, told The Balochistan Point. 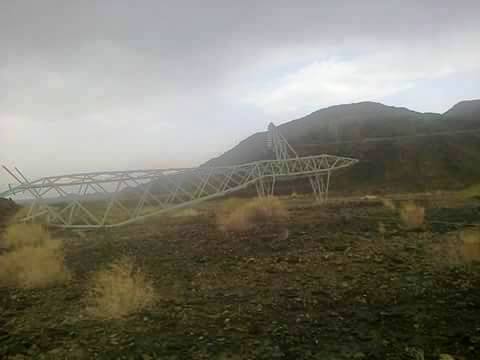 One of fallen Electricity Pylons in Mand region

Mercury is on high in Turbat during the month of June and temperature has been recorded up to 47 degree Celsius in last few days. Unavailability of electricity along with hot weather has made life extremely difficult for residents of Turbat city during the month of Ramzan. Residents long for cold drinking water at the time of, Aftar, the fast ending ritual.

In separate news, The Balochistan Point has learnt that Malikabad feeder of Turbat is suffering from low voltage problem.

“Malikabad Feeder is the busiest feeder in Turbat and Low voltage is due to heavy electricity load in summer season,” Ejaz Ahmad advocate told The Balochistan Point. Electronic appliances of many households have developed faults due to low voltage problems, added Ejaz Ahmad advocate.

Residents of Malikabad have threatened to protest vehemently if the problem of low voltage is not resolved soon.

Most parts of Makran division are facing 14-16 hours of load shedding on daily basis in current hot weather.

Two weeks ago, Turbat city suffered non-stop electricity suspension for 43 hours and Tump tehsil was without electricity for 10 days.

Residents of Turbat city demand from Chief Minister of Balochistan Dr. Malik Baloch to take urgent notice of electricity problems in his home district of Kech and rest of Makran division.

Published in The Balochistan Point on June 22, 2015