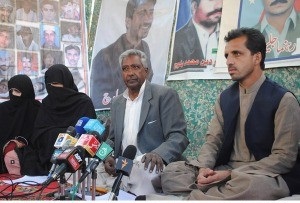 Enforced disappearances must come to an end

The officeholders of Voice for Baloch Missing Persons talking to journalists during a press conference in Quetta Press Club on 26 June 2013 said that at least 320 Balochs had been forcefully disappeared and 80 previously abducted Baloch have been killed and dumped. The chairmen of Voice for Baloch Missing Persons, Nasrullah Baloch, and Vice Chairman, Mama Qadeer Baloch expressed their concerns over extreme human rights violation in Balochistan.

The Voice for Baloch Missing persons, an organization working for safe recovery of Baloch missing persons, claims that At least 30 others Baloch had been abducted during recent military operations.

They added that students, journalists, doctors and teachers are targeted only because they raise voice against state brutalities. Military operations are continuing in different parts of Balochistan, which has brought the daily life to a standstill in several towns of Balochistan. Many Baloch have been forced to flee their native areas due to military operations. Killings of political activists are also continuously rising at alarmingly high rates. “The journalists and humanitarian organizations are not allowed to work freely in Balochistan,” Mama Qadeer Said.

The leaders of Voice for Baloch Missing Persons term the ongoing brutalities as grave forms of human rights violations and demand the International humanitarian organizations and International community to immediately take notice of Baloch genocide and play their role in stopping these brutalities.

It cannot be forgotten that the newly elected government and Chief Minister of Balochistan Dr. Malik Baloch relates insurance ’ of peaces and harmony with the release of Baloch missing persons and reduction in the recovery of decomposed and mutilated dead bodies of Baloch missing persons. However, since Dr. Malik Baloch took oath as Balochistan CM, a rapid increase has been noticed in “Abduct, kill and dump” n as well as military operations have been launched in different areas of Balochistan.

Though Dr.Malik visited protest camp of Voice of Baloch Missing Persons and met Qadeer Baloch and assured to make efforts for safe recovery of Baloch missing person, no tangible development has been practically done. The missing persons rather than being safely come to their  homes are being turned into dead bodies.

The International organizations and human rights organization only consider it enough to report human rights abuse in Balochistan. Prior to this  according to the media  reports and VBMP , more than 600 bullet-riddled and decomposed dead bodies of Baloch missing persons have been found in the last three years, who were first abducted and later killed and dumped. However, the disappearance of Baloch youth has continued since 2000.

A number of cases of the Baloch missing persons have been heard and the Balochistan High Court (BHC) has hundreds of pending petitions filed by the families of the dead and missing Baloch, yet it has failed to get recovered the missing ones.

No doubt, Balochistan is suffering from huge human rights violation. If the government, judiciary and media including human rights defenders do not take it serious then not only they will be responsible for the loss of hundreds of lives but the situation will reach a point of no U-turn.