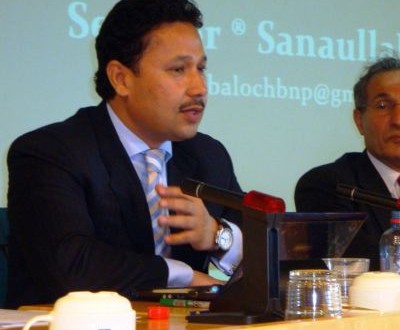 Sanaullah Baloch belongs to Kharan district of Balochistan. He was elected as the youngest member of National Assembly in history of Pakistan at the age of 26 in 1997 elections. He has served as a parliamentary secretary for Interior and Narcotics. He was elected as Senator from Balochistan in 2003 and resigned from senate of Pakistan in 2008. At the moment he is working with UNDP and assisting African countries in their constitution development. Mr. Sanaullah Baloch regularly contributes opinion articles to leading English dailies of Pakistan. The Balochistan Point conducted an exclusive interview with Mr. Sanaullah Baloch.

You are senior constitutional advisor of UNDP. Tell us more what are you doing currently?

Since most of Baloch representatives were forced to live in exile since 2005 due to bloodiest military operation in Balochistan, I decided not to sit idle when I moved to Norway in 2006. I engaged with several UN agencies and think tank organizations on governance, democracy, human rights, natural resources and constitutionalism related areas. I served as senior adviser of Somali Constitution-making support project in 2011 and currently I am the Chief Technical Adviser with UNDP and assisting and providing strategic guidelines to West African countries.

Balochistan National Party (BNP) is vocal about election riggings in last general elections, rigging against yourself and BNP was an organized rigging or by political opponents only?

Everything in Balochistan is well orchestrated. We knew that the elections are going to be engineered and well managed by the colonial power, Islamabad. They have long-term plans to destroy Balochistan’s social and political fabric to pave way for smooth exploitation and encroachment of Baloch land, resources, sea and lives.  Personally, I regret taking part in 2013 Drama, known as 2013 Elections. We thought Pakistani establishment has learned the lesson and it will allow people to express themselves fairly and freely and accept people’s verdict. Results of 2013 elections were not natural outcome of public opinion – it wasn’t a political and democratic process – but sadly to say that it was part of decade long script to further oppress and exploit Balochistan in disguise of fake elections, democracy, and morally weak leadership.

Why was BNP the main victim of election rigging in Balochistan, in your opinion?

BNP has been the only party who has been on the forefront – we are the true democratic and uncompromised voice of Baloch people and Balochistan. Current ruling nationalists in the province were part of Musharraf local government system. They have more affection and love for Islamabad’s suited-booted establishment than barefooted Baloch. BNP has not only been systematically stopped from raising Baloch’s view point in the Parliament but BNP’s top leaders and workers have also been systematically assassinated. We lost great friends like Habib Jalib Baloch, Noordin Mengal, Salam Baloch, Zaid Baloch, Liaqat Baloch and more recently, Attahullah Mohammadzi.

Some people believe that it was not possible for BNP to contest last polls without entering into some sort of agreement with establishment, Your Comments?

True – in Pakistani politics and more particularly in colony like Balochistan without master’s consent it’s hard to have silver crown. But how a respected Baloch will compromise on thousands of dead bodies and martyrs that they sacrificed their life for honor, dignity and well-being of Baloch and Balochistan? There was a greater possibility of compromise to get few provincial and national assembly seats but compare to national honor sitting in toothless assemblies is petty. More recently through guns, canons, money and proxies Islamabad has strengthened its colonial rule on Balochistan. However, this further repression and oppression is also resulting in greater political education amongst Baloch about foes and friends and rights and wrongs.

PMLN leaders often boast that they have given power to Baloch nationalists while having majority in Balochistan Assembly. You agree?

There is difference between political empowerment and sham representatives. During British colonial rule in India and Africa, all had councils and representatives bodies but still people continued to struggle against colonialism. Gandhi and M.A. Jinnah were on the forefront because having political façade dose not translate into political and people empowerment. Provincial assembly has been there since 2002 but what has been its role in term of social development, human rights and conflict resolution? Balochistan is worst than Afghanistan and African countries with highest rate of poverty, unemployment, illiteracy, mortality and malnutrition. Also thanks to Islamabad they have introduced a new disease and that is corruption. Currently, Islamabad’s charity and funds are going into pockets of establishment-chosen sham representatives and officials.

What do you have to say about the 17 month rule of Dr. Malik as Chief Minister?

Recent reports and details of violence, sectarian killings, unemployment, corruption and increase in disappearances and kill and dumps are clear indication of his control on Balochistan affairs.

Recently there has been demand for census in all Pakistan. What do you have to say about the consequences of census in Balochistan?

There is a greater plan to permanently disfigure Balochistan’s ethnic configuration and favor one ethnic group. This trend was witnessed in 2013 election Drama when Quetta-Chaghi and many Baloch dominated constituencies in Quetta were gifted to non-Baloch candidates. To get rid of Balochistan’s historical question, Islamabad is planning to convert Baloch into minority through fake and manipulated census process. We demand that until and unless Baloch-Islamabad conflict has not been addressed – census and mega development projects including sale of Balochistan’s copper-gold must not take place. Otherwise any attempt to play with Balochistan demography will result in to severe consequences.

The Afghan immigrants are issued legal documents in Balochistan, as proved by confession of three NADRA employees under NAB investigations. Do you think that this is part of an engineered plan?

True – in Chaghi, Quetta, Noshki, Bolan and Sibi district; government’s special units are working to register close to 1 million Afghan refugees. This was a small revelation if someone closely looks in to Bolan and Sibi district record there has been hundreds of thousands of fake registrations. In Quetta on behest of government, Eastern and Western bypass lands are given to Afghans to convert Baloch into a minority within their homes.

Dr. Malik along with his entourage spent over two weeks in France in relation to Rekodiq Case? Will Recodiq be used for benefit of people of Balochistan as government claims or not?

I have discussed this in detail in my English article published in The News and Urdu article published in Intekhab and Azadi. I have no confidence on Rekodiq legal team. It comprises of people who served during Musharraf and were part of the caretaker cabinet such as Ahmer Bilal Soofi. They are encouraging and pushing less knowledgeable Balochistan officials and Chief Minister to accept offer from the company which has filed suit in the international court.

As I mentioned earlier until and unless Baloch-Islamabad issue is not resolved Rekodiq must be shelved. Otherwise, in pretext of conflict, Islamabad will sell this generation-owned wealth to foreign companies for pennies with no benefit to Baloch and Balochistan.

What’s your opinion about the Chinese funded development projects in Balochistan such as a proposed coal power plant in Gaddani, an oil refinery in coastal areas of Balochistan and Gwadar port?

Balochistan is witnessing blood and pain on daily basis. Such projects may benefit the Chinese and few quarters in Islamabad but there has been no profit from Chinese presence to people of Balochistan. They have finished 36 years lifespan project of Saindak in just 10 years. There term has been extended without legal process for another five years by Zardari government. Currently they are illegally mining in Rekodiq area. Such mega developments without social and development plan are day-light robberies. This naked exploitation is continued since 1952 without any benefit to Baloch.

How do you see the Talibanization in Balochistan? Is this tool not being used to weaken   Baloch nationalism movement?

This is a very classic “strategy” that Islamabad is using to destroy Balochistan’s time-tested social and cultural fabric. If people in Balochistan, Afghanistan and Pakhtunkhwa have peace, education and opportunities to grow – who is going to buy Punjab’s, Gujrat’s, Gujranwala’s and Faisalabad’s third rated products? We are forced to send our kids to madrassah and let our resources benefit the elite province kids to have top quality education.

Balochistan question is political, economic, administrative and more importantly security. All these areas are controlled by Islamabad and their planned mismanagement has led to the current state of affairs. No government has guts to solve Balochistan question. Key to peace in Balochistan is in control of establishment. If they are not willing to see peace, then no plan and policy can be successful. It is waste of time and resources to rely on weak political institutions to resolve very complex conflict. Balochistan issue overlaps current borders. It is also linked with regional geopolitical challenges and more importantly with Afghanistan.

Published in The Balochistan Point on December 1, 2014

Disclaimer: Views expressed in this article are those of the interviewee and The Balochistan Point not necessarily agrees with them.

2014-12-02
Editor
Previous: Playing Balochistan in Sindh
Next: Problems In Education Sector And Some Solutions