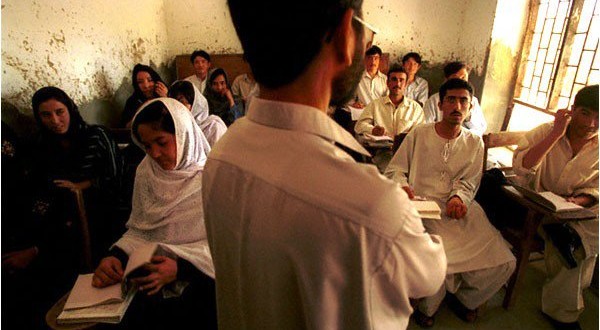 Expel girls or close down

At least 23 private schools and English language centers in Balochistan’s western Panjgur district have been closed since April 25 because of threats and intimidation by a previously unheard-of militant group Tanzeemul Islamul Furqan. Armed men belonging to the group barged into schools and warned the teachers and students against co-education, which they said was not allowed in Islam. They fired warning shots as they told them to either shut down or send their girl students home.

“After threatening teachers and students of various institutions, the masked armed men indiscriminately fired gunshots into the air and vandalized their property,” one of the teachers said. “They beat up a teacher and took away Rs 14,000 from him.”

The religious group has sent threatening letters written in Urdu to schools across Panjgur asking them to expel girl students, and also warned taxi and van drivers against taking girls to school.

Following the threats and intimidation, on 14 May, unidentified men carrying weapons stopped Major (r) Hussain Ali when he was taking girls to his own private school, the Oasis School, in a van. They beat him up and set the van ablaze. The students fled unhurt.

“In Balochistan’s Makran division, Panjgur is comparatively religious, with almost 100 madrassas and annual teaching activities,” according to Noor Ahmed, another school teacher based in Panjgur. “That is why religious fundamentalism is increasing day by day, and teachers are being intimidated for tutoring girls.”

He said teachers like him continued with their jobs despite having received threats by telephone. “But when they started barging into schools and assaulting us for performing our duties, we decided to close down all private institutions.”

Women have traditionally played a pivotal role in the nomadic lifestyle of the Baloch in history, according to veteran Baloch leader Dr Abdul Hayee Baloch, who is a former president of the National Party. “We are concerned about the threats to girls’ education in Makran, and particularly in Panjgur,” he said. “This situation is being created deliberately in order to malign the Baloch political movement internationally and to keep our daughters away from their fundamental right of education.”

He also criticized confiscation of books in raids by police and the paramilitary Frontier Corps (FC) in Turbat and Gwadar this year.

In January, FC men raided a book fair at the Atta Shad Degree College in Turbat, and seized what they said was separatist literature. In April, there were reports of a similar raid by the police in Gwadar, in which two shopkeepers were arrested.

“There have been raids against books that are about our culture, history and literature,” Dr Baloch said. “Baloch political parties should resist.”

Panjgur was hit by a Baloch nationalist insurgency after the killing of Balochistan’s former chief minister Nawab Akbar Khan Bugti in 2006, “and the state actors assume that our private institutions are nurseries for separatists”, said school teacher Anwar Baloch. “But that is not true. We are merely imparting education.”

Meanwhile, hundreds of people meanwhile took to the streets against the threats to private schools in Panjgur, said local reporter Barket Jeeven. They included girls holding banners saying education was their fundamental right.

“The district administration only convened a meeting of local clerics and Panjgur Private Schools Association,” said Ababagar, “but it ended without any effective outcome.”

Anwar Baloch said teachers from Panjgur had met Chief Minister Dr Abdul Malik Baloch in Quetta and asked him for help. He promised them security, but the teachers want a more fundamental resolution of the issue, he said.

Locals say girls in Panjgur feel threatened, especially after the two incidents of men spraying acid on six girls’ faces in the Quetta and Mastung districts of Balochistan when they were shopping for Eid last month.

Names of the teachers have been changed to protect their identity.

Republished in The Balochistan Point on August 1st, 2014.

2014-08-01
Editor
Previous: Editorial: Rally against enforced disappearances on Eid day
Next: Taboos on the brink: What you don’t know about Balochistan