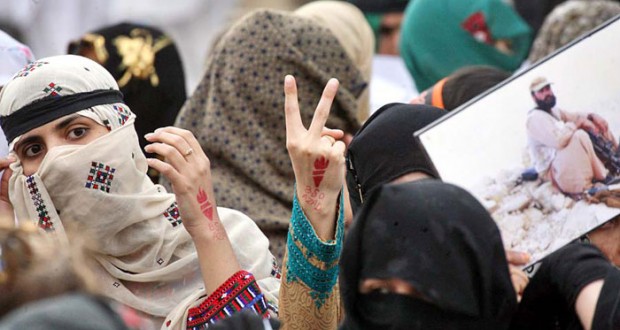 Taboos on the brink: What you don’t know about Balochistan

For Most of us, the group of words like violence against women, harassment at institutions or work places, rape, honor killing and gender disparity are not that staggering because we listen about these so often in mainstream media–both domestic and international–that it offers none but very little appall by now. Besides, it is way too “ordinary” a news in this part of the world to get noticed.

India, for instance, where reports of raping women continued with brutal killings afterwards, rush to our auditions through any medium on an almost daily basis. We too, in Pakistan, are not lagging behind in generating these kind of news nowadays and the media of both countries –owing to the concern that both states have for each other–seems to have merged and unlike people and trade, news makes its way across the border very smoothly.

I suppose this is the major factor in our being indifferent. Also the extremism, which is the buzzword of political and social realm here, has transformed so great a deal our individual sanity into a collective “Accepting-mode” that we do not bother to go into reason and ironically we only notice it when for a certain span, for one reason or another, the news of this kind doesn’t make it to the media. On the contrary, as is the case with any positive development, which we also neglect very comfortably.

The problem, so it seems, is with whole of the society. Not only the rapists, harassers or with anybody practically guilty of perpetrating violence against Women. The root of the problem lies in our perception of women, according to which she is basically a recluse carrying honor of her family and she must be confined and protected. We virtually see them as Aliens. And women, with the ever-so-pathetic existence of theirs, find it hard to make their way with esteem and strive exceedingly hard to survive while depending on men –but there always exist the extraordinary, the exceptional.
The one that drifts apart from the rest, smashes hard into taboos, swings into action for reconstruction of socio-political narrative, rejuvenates the moribund society and assume hold of what is designated naturally to it.

This “extraordinary” is today’s woman of Balochistan. Conflict-stricken, Balochistan is always deemed as an object of chaos and disturbance, at least by those not living there.

The Media–by and large–with gazillion of News channels and dailies covering every minor story with every possible detail, is not that agile in Balochistan as otherwise it is. Leaving the reasons behind this indifference or inefficiencies for another day, even the most important of developments which have profound impact on the socio-political condition of the society are being just “missed” by the media–except for few writers and journalists who follow these events closely.

The Woman of Balochistan is changing the popular narrative associated with her, as given space to the point above, owing to which they are expected at most to be seamstresses at home. Changing the socio-political fabric would be the last thing on the earth to expect from them.
People also think they are killed for honor, anguished for dowry, forced to cover their bodies and are subjected to extreme disparity in “neighbourhoods” like Balochistan. But the fact is otherwise. Though mainly rural and backward, Balochistan is a far more better a place for women to exercise their actual role in the society. There are reasons behind this. First and Foremost, the Baloch society is mainly secular and liberal in composition. Religious fanaticism, though relevant politically, is not a characteristic of the Baloch society.

It is to be noted that the Clergy is not as powerful in Balochistan as even in most developed urban parts of the country. Also driven by secular nationalism and the existing restive state of the province, the society simply could not further afford the seclusion of half of its members. They are no longer “Aliens” in society and politics, neither irrelevant. These set of factors, over time, have transformed the society into more accommodating and liberal regarding gender differences.

Some would counter-argue that women in Central Punjab or urban Sindh and KPK are far more independent than they are in Balochistan which is a tribal society after all. They would cite instances of some independent, influential and iconic females like Sharmin obaid, Malala Yousafzai, Samina baig, Naseem Hameed, etc. First of all Balochistan is no longer a tribal society-in true sense of the term. Except for few districts, there is virtually no authority of a tribal chieftain. Though they exist, they are only as relevant as the people themselves.

There is horrible lack of education and health facilities in rural Balochistan and amenities like potable water, electricity, gas and communications are rare to avail. People move to Quetta or at least travel regularly to and fro. This further diminishes tribal influence.

The women like those named above are more of individual tokens of achievement than a possible manifestation of societal transformation. Though their achievements are a sheer motivation for women both here and everywhere and they in certain aspect exhibit progress and independence in person, it does not display any feminine upheaval in society at large. The issue of Missing persons and other such events have succeeded to bring women to the forefront of struggle which in Balochistan is underway since decades. Political consciousness, global awareness and the plight of their brethren have equally contributed to their coming forth.

It was that long march from Quetta to Islamabad earlier this year which displayed that the women of Balochistan are very much relevant in the political realm.

Social media-savvy, exploiting it for the due rights of their people, participating and leading protest camps in Quetta, Karachi and Islamabad to show their concern and activity along with their education and household responsibilities is the symbol of their courage and perseverance in the face of difficult times that they are facing in general.

But it was most recently that they showed just how important a factor they are in this society and how seriously they stand for change. That was at the funeral of Nawab Khair Bakhsh Marri –regarded as the “Father of Baloch Nationalism” by the youth and revered popularly as “Baba-e-Balochistan;” that they outnumbered men and appeared in hundreds in the funeral and virtually dominated the event by leading the procession to the Suburban graveyard. For starters, women are traditionally not allowed in funeral processions leading to the cemetery and they stay at home while men bury the deceased. But they not only actively participated but lead; by carrying flags and chanting full-throated slogans. It may seem ordinary to some but it was not so usual for this is a sign of such a transformation that takes ages to bring.

These and lots of other developments are the signs of that “change” which every society on the earth so eagerly awaits even today because the universal perception of women is greatly flawed. Being particular to our society, the word “Parda” in urdu as we know it, is nearly or exactly translated in English as seclusion, it has nothing to do with modesty which is equally ordained for men as for women.

Thus the problem is not with our following any faith but our wrong interpretation and making taboos out of tradition which ultimately form perceptions, which needs an enlightenment to be reformed.

Farooq Abdullah is a civil engineer, movie buff and a book addict, a socialist and a freelance writer.He can be reached at Twitter.com/Farooq Abdullah and Farooqabdullah89@hotmail.com

Republished in The Balochistan Point on August 1, 2014

2014-08-01
admin
Previous: Expel girls or close down
Next: Candlelight Vigil in Quetta for Gaza victims