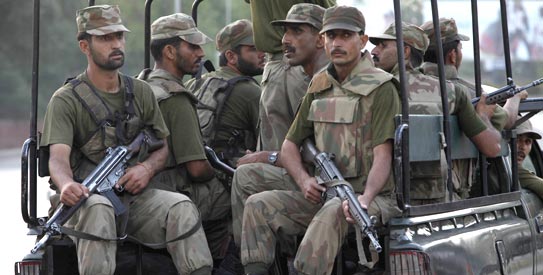 According to a statement issued by FC three security personnel also sustained injuries in the operation which was carried out by Panjgour Rifle, Awaran Malisia and personnel of Special Force Wing. “Helicopter used during the operation only for providing logiestic support,” the statement said, adding that operation was conducted in the area where different banned organization had set up their hideouts and camps.

On the other hand, banned outfit, Baloch Liberation Front (BLF) spokesman calling from an unspecified location to media offices denied the claims of FC that BLF personnel killed in the operation.

“Security personnel along with nine gunship helicopters and two jets made bombardments in mountainous areas of Mashkay and targeted common people,” BLF’s spokesman claimed, adding that one person was killed and four others including one woman and three children were wounded in the attack.

Balochistan Home Minister Mir Sarfarz Bugti at a press conference said that the Panjgur Rifles of the FC were carrying out a search operation against militants when the shootout took place.

“The operation was launched on the basis of intelligence reports that militant organisations were running training camps in the remote mountainous area,” he said, adding that militants attacked FC personnel with rockets and modern weapons, inflicting wounds to three security members. Bugti said that the FC fired back and killed 10 attackers.

He said that bodies of the militants would soon be presented before the media.

The Baloch nationalist parties and organizations have strongly condemned the operation in Panjgour district and termed part of series of subjugation of people.

They alleged that since inception of PML-N government, the operation in the Balochistan and whisking of political workers and throwing their dead bodies have been increased.

They demanded human rights organizations for taking notice of killing of innocent people and transparent inquiry.

Published in The Balochistan Point on May 6, 2014