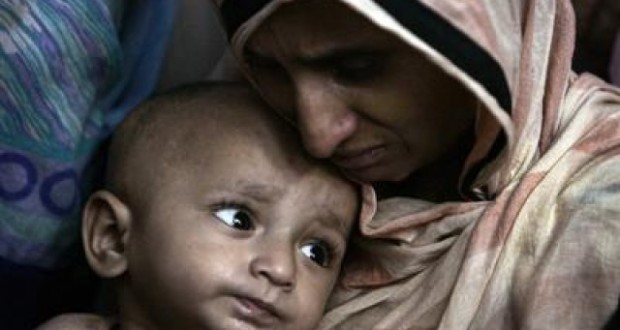 Maternal mortality ratio in Balochistan at 785

QUETTA: Speakers at a seminar revealed that the mother mortality ratio (MMR) in Balochistan is as high as 785, whereas the neonatal mortality ratio stands at 63, and the mortality rate of children up to five years of age is 111. “The cause of high mortality rate in children and mothers is due to lack of trained health care providers,” said Shama Ishaq and other speakers, and added that the Balochistan government is concerned about the high rate of deaths of women and children in the province. “We have a vision to save every single life in the province. Therefore, we have taken serious actions. Recently, the Balochistan Assembly has passed a resolution that all the doctors would be posted at their native areas to serve the remote areas,” they said and added that in order to reduce mother and child deaths in the province, we have regularised 7,265 lady health workers. Shama, who is also a MPA, was addressing the International Midwifery Day, jointly organised by the Health Department, Save the Children and Mercy Corps Paksitan. Speaking at the seminar, MNCH Programme Coordinator Taj Riasani said that the MNCH programme has deployed 197 CMWs in 18 districts of the province. Currently 165 girls are enrolled in the 18 months course in 15 Midwifery Schools of the province, he added. He further said that gradually the number of CMWs would be increased up to 1,800. Nadeem Shahid, advocacy specialist at Save the Children, Balochistan, said that a CMW from District Kech, Rahat Noor has been selected for the International Midwifery Award. She would add to the honour of Pakistan and would receive the award in Czech Republic. He urged the provincial government to increase the number of CMWs, LHWs and appoint two vaccinators for each union council in the province. Shahid said that under the Save the Children programme, 43 females of District Gwadar, Lasbela and Ziarat are receiving 18 months Midwifery training at the Public Health School, Quetta. These young energetic female would be deployed in their respective districts after the complementation of course. Mercy Corps Pakistan team leader Saeedullah Khan informed the audience that Mercy Corps is working in three districts of the province in collaboration with the provincial health department. He urged the female of Balochistan to join the health department as CMW, and serve their people by providing basic health care services to reduce the maternal and child mortality. Students of the Midwifery School and Human Resource Development Health performed tableaus to dramatise the revealing myth and norms in society regarding health care of pregnant women. Save the Children distributed shields among the students who performed.

Published in the Balochistan Point on May 06, 2014