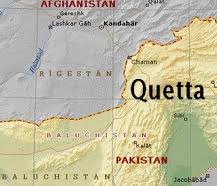 QUETTA: The police recovered three bodies from the eastern bypass area of the provincial capital on Saturday. An official from the Satellite Town Police Station said that some passers-by spotted the bodies in Sasti Basti area, located in the premises of Quetta Development Authority (QDA) graveyard, and informed the police. The police rushed to the spot and cordoned off the area. The deceased were moved to the Civil Hospital. In another incident, two bodies were recovered. The victims are said to be the residents of Pashtunabad. “The deceased received the bullets in their head and chest,” a hospital source said.“The bodies were handcuffed and killed in same area,” the police officials said and added they recovered a TT pistol and five bullet shells of a 9mm pistol from the area. The police registered a case and started investigation. staff report[/dropcap

2013-06-30
admin
Previous: Balochistan is a complicated zone and no one can be blamed for ongoing scenario: Dr. Malik Baloch
Next: The flag bearers of justice have restored to a dead silence in Balochistan: BNM