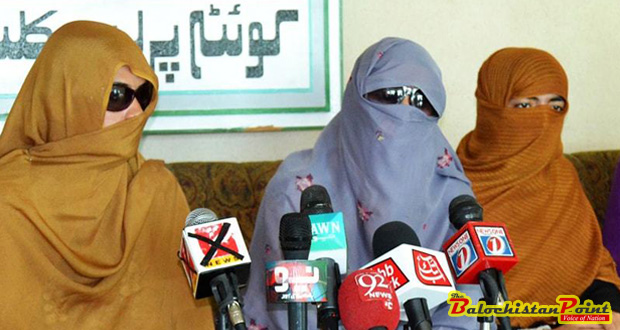 Quetta – Female students of University of Balochistan (UOB) taking annual exams of Masters in Education (M.Ed) announced to boycott the exams due to frisking by male invigilators.

Addressing a press conference in Quetta Press club on Sunday, Female students of UOB lead by Ayesha, Zareen and Asma complained against what they claimed immoral attitude of controller examinations of UOB.

Frisking of female students by male invigilators was the triggering point for protests against the University Administration which resulted in shutting down UOB for three days.

“Next day when we protested against the shameful act of controller examinations, UOB administration ordered police to Baton charge on students which resulted in wounding 5 female students,” lamented a student.

“10 students that are taking exams are being provided the complete freedom to cheat in the exams,” alleged the students.

“We support all measures to curb cheating but we will not tolerate the immoral practice of being frisked by male invigilators,” reiterated the female students.

Published in The Balochistan Point on June 15, 2015