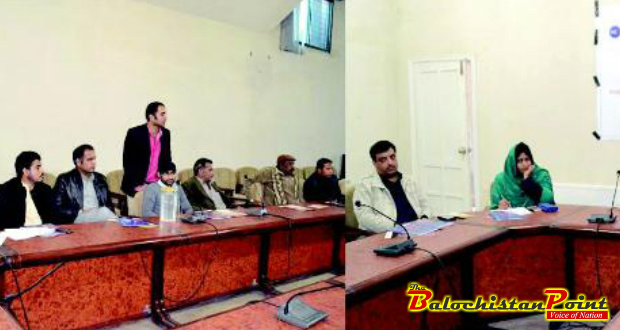 Quetta – One day gender-Sensitive reporting training was imparted to journalists of Quetta, on Saturday.

One day training with the title of “Analyzing media in Pakistan through gender lens” was conducted in Quetta Press Club.

Training session was conducted by Uks research organization with the support of National Endowment of Democracy (NED).

Senior journalists who participated in the training also shared their views related to reporting about women in media.

Abdul Khaliq Rind of Jang newspaper said that inappropriate reporting of women is a problem for other provinces not for Balochistan.

Raza-ur-Rehman, Resident editor of Express News claimed that journalistic language in Pakistan has been negatively affected by journalists of Punjab.

“Media in Balochistan does not inappropriately report issues of women due to social values of the province which are based on respecting women,” said Syed Ali Shah Bureau Chief of Dawn News.

He admitted that media in Balochistan has failed to highlight problems of Balochistan in proper way.

Jan Buledi, Spokesman of government of Balochistan was the Chief Guest of the training session.

He said that the way media reports about women reflect the attitude of society towards women.

Mr. Buledi claimed that women are reluctant to enter filed of media and politics and that’s why there are so few women in those fields.

Published in The Balochistan Point on November 28, 2015