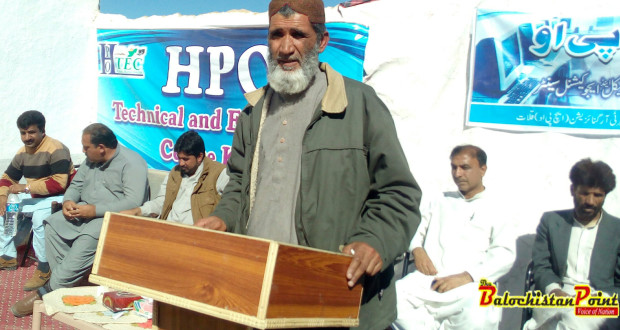 Kalat: The performance of HPO Technical and Educational Centre (HPO-Tec) is commendable and initiatives taken by HPO collaborated with NAVTTC for skills development possibly will help in poverty alleviation. These comments were made by district heads of different government departments at tool kit and sewing machines distribution ceremony on Friday, 22 January 2016.

Sumalani lauded the skills enhancement program of National Vocational & Technical Training Commission (NVTTC) in Balochistan and said that such initiatives in backward areas of Balochistan would be of a great assistance in poverty alleviation.District Education Officer Sher Ahmed

2016-01-24
admin
Previous: Help of Civil Society Sought in Achieving SDGs in Balochistan, Sindh
Next: Life of an Ordinary Polio Worker