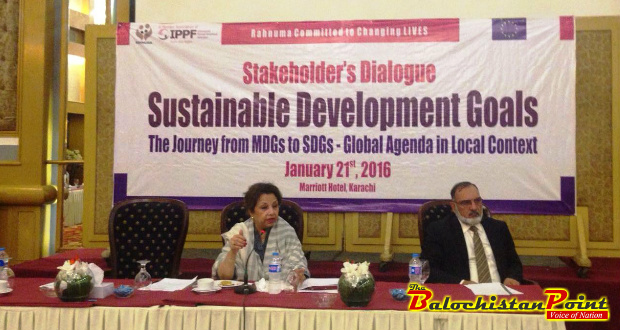 Karachi: Help of civil society was sought to achieve Sustainable Development Goals (SDGs) in Balochistan and Sindh, in a meeting held in Karachi on Thursday.

A dialogue was held in hotel of Karachi with stakeholders of Sindh and Balochistan on SDGs under the auspices of Rahnuma FPAP.

SDGs are the United Nations development agenda from 2015 to 2030 which were approved in a resolution passed in September 2015.

A large number of participants from Civil Society Organizations of Sindh and Balochistan were also present in the meeting. 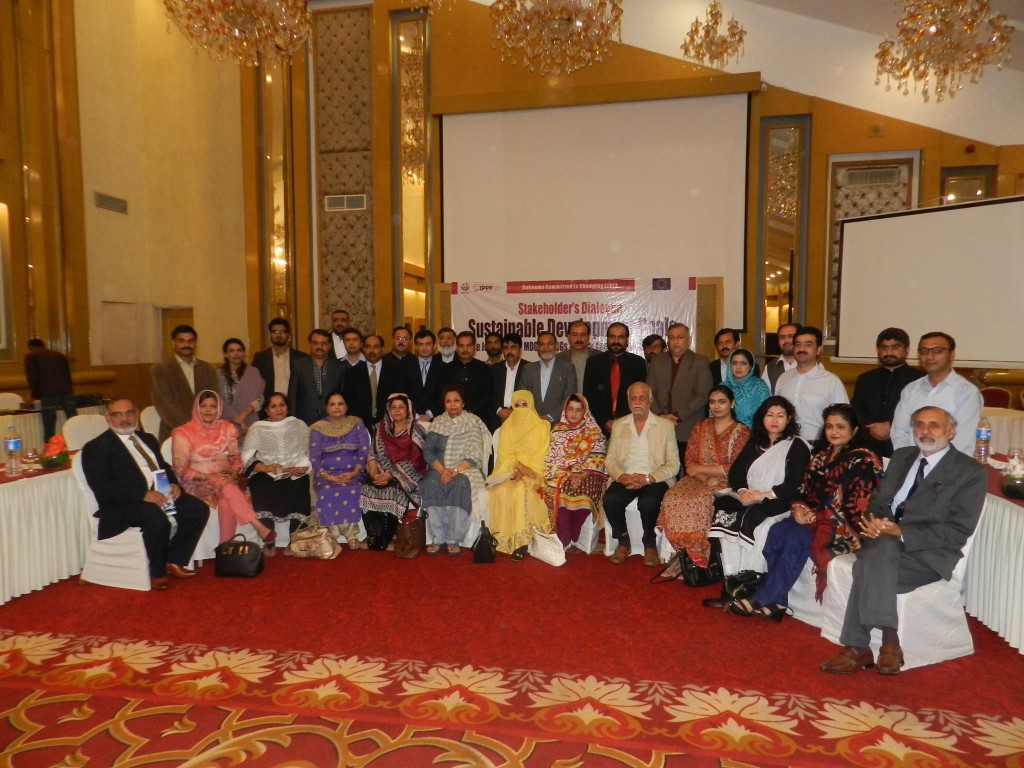 group photo of the participants

Dr. Zafar Ikram, consultant of Rahnuma FPAP, said that Balochistan has performed poorly in terms of achieving the targets set under Millennium Development Goals (MDGs). “Balochistan scored 1 out of 23 on MDGs scorecard, same value was 18 for Punjab and 9 for Sindh,” Dr. Ikram Said.

Speaking at the occasion, Mahtab Rashidi said that without the involvement of Civil Society it’s almost impossible to achieve the targets set in SDGs.

Lamenting the population growth of Pakistan, Mahtab Rashidi said that religion has been misused in Pakistan to make family planning ineffective.

Commenting on the role of Council of Islamic Ideology (CII) in the context of family planning, she said, “CCI by constitution had ceased to exist in 2009 and therefore all recommendations that it has made after that have no constitutional binding.”

She further said, “We have to reduce reliance on donor driven development programs and focus on sustainable initiatives.”

Mahtab Rashidi congratulated the female MPAs of Balochistan, present in the meeting, on the Harassment at work place act.

Nabile Malick, facilitator of the program explained that Sindh Assembly has passed child marriage restrain act 2013 which has made marriage of less than 18 years old girls illegal.

Shama Ishaque Baloch said that Child Marriage restrain bill is under process in Balochistan assembly and will be tabled soon.

Spozmi Achakzai lamented that where all the donations to the Non-Governmental Organizations (NGOs) go when there is no work on the ground.

Different stakeholders present in the meeting vowed to contribute in achievement of SDGs in general and population and child marriage targets in particular.

Published in Balochistan Point on January 21, 2016