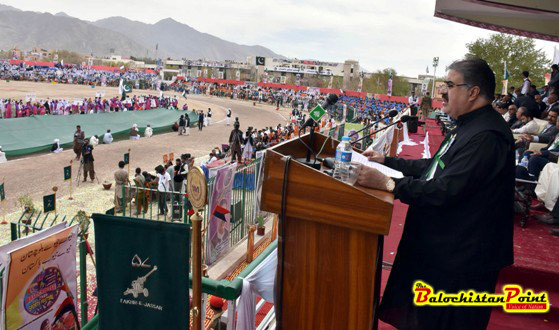 Quetta:  Minister Balochistan, Nawab Sanaullah Khan Zehri has said that Government would strive hard to provide opportunities to the youth  so that they could demonstrate their talent and play their crucial role in the development of country. “Government   will not to allow resurface of drug addiction and terrorism in the province through   sport activities in Balochistan,” he expressed his determination.

He expressed these views while addressing the inaugural ceremony of Balochistan Sport Festival here on Tuesday.

Chief Minister said that regular holding of sports festival in the province depicts the love of people of Balochistan for Pakistan, adding that our youth is bold and energetic. “Today our country is facing internal and external challenges. Some misled people for their personal gains trying to create threat for the peace of the country,” he added.

He said that subsequent successes of operation “Zarb-e-azb” the hopes of prosperity and peaceful Pakistan were augmented while firary groups were surrendering and joining national mainstream. “Due to peace, the pace of development is taking momentum in Balochistan,” he added.

Chief Minister said that now it is the responsibility of new generation to put the country on the track of development, prosperity and made it abode of peace.

He said that he wants to take oath from the youth today that they would actively play their role for the eradication of terrorism, extremism and linguistic and ethnic difference, so that the nefarious designs of enemies could be foiled and Pakistan could be made a peaceful and welfare state. “We will strive hard to achieve this goal,” he added.

He congratulated the audience for celebrations of “Pakistan Day” under that sport events are underway across the province. “I hope the courageous and energetic players would make success this festival and will leave a massage for world that they are not behind from anyone in the world of sports,” he said.

Chief Minister congratulated players for participation and organizers for holding such a huge sports festival. Chief Minister announced Rs 50 million grant for development of Ayub Stadium, and assured every possible support on the part of government for the promotion of sports in the province. He announced that sport festival would be organized every year. End

Published in The Balochistan Point on March 23, 2016

2016-03-23
admin
Previous: Appointment against Merit: One More Case of Illegal Appointment Unearthed
Next: Editorial: The Plight of Ignored Water Resource Management Graduates and Their Credible Services