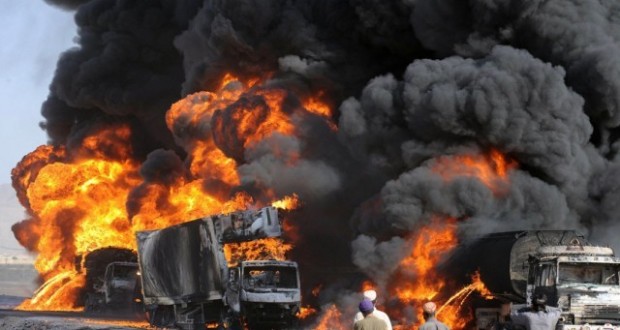 According to the details unidentified armed men fired rockets and bullets at the convoy of 15 oil tankers traveling from Karachi to landlocked Afghanistan.

The police officials said that gunmen attacked the convoy at a rest stop in Surab town of Kalat district. They fired rockets and bullets on the convoy from both sides of the road and in the attack eight tankers were burnt.

Muhammad Akbar, a senior administration official confirmed the attack and death of   a driver of  tanker.

No group has claimed the responsibility yet

Published in the Balochistan Point on September 14, 2013

2013-09-13
admin
Previous: 85 Afghan nationals arrested in Quetta
Next: That missing persons will be charged according to law:CJ