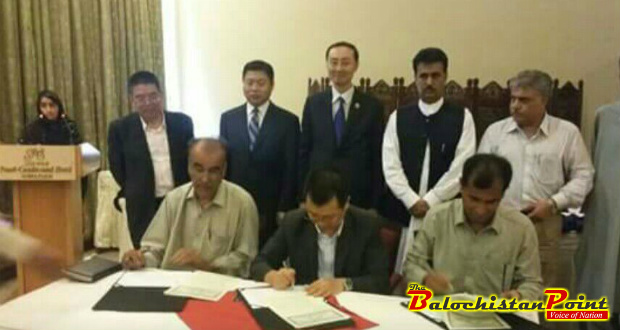 Gwadar – Chinese Ambassador to Pakistan, Mr. Sun Weidong, along with the CEO of Chinese Overseas Port Company (COPCH) Mr. Zeng Qingsong and their delegation visited Gwadar to promote bilateral cooperation with the local people and representatives, on 27th July.

During the visit Ambassador witnessed the MOU signing between the CEO of Chinese Overseas Port Company (COPCH) Mr. Zeng Qingsong, the District Education Officer of Gwadar Mr. Mohammed Jan Raza and the president of Private School Association Gwadar Mr. Nasir Rahim Sohrabi. During the MOU ceremony the Ambassador met with the representatives of teachers and students from the local schools and distributed gifts among them as well.

An amount of about PKR 0.5 million was announced as financial assistance to deserving students from different schools. After visiting a local hospital, the Ambassador also announced PKR 4 million for the improvement of health and education sector of the city and ensured future support for the social development and improvement of local people’s livelihood in Gwadar. Along with financial assistance, full scholarships to five outstanding students of Gwadar to study in China were also announced.

During the visit the Ambassador also met with Mr. Dostian Jamaldini, the Chairman of Gwadar Port Authority and the local officials to exchange views on strengthening friendship and mutual cooperation. The Ambassador also paid site-visit to Gwadar Port and potential sites for future construction of New International Airport and East Bay Expressway.

The full functionality of the port and efficient implementation of the future projects was also ensured by the Chinese Company. The Ambassador considered the development of Gwadar as the flagship project for the Pak-China Economic Corridor.