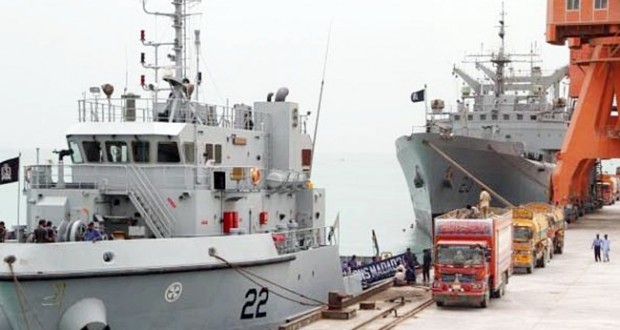 Gwadar Port and The Baloch

Gwadar with its massive economic strategies not only for this region but for post-Soviet space as well as for Eurasia and Africa at the entrance of Omani and Persian Gulf, a route that bridges distances between nations for most of the world’s oil trade and where warm-water deep-sea port exists through out the year as a vital asset for the economic growth of the region.

However due to the political turbulence and lack of resources in the region, the port has not been completely functional yet. Hence the future of Gwadar port relentlessly relies on infrastructure and political stability of Balochistan which the major concerns for the Pakistani, the Chinese and the interested world powers at present are.

Gwadar port is not today’s discovery. The history of Gwadar as a natural port dates back to fifteenth and sixteenth centaury. The importance of this coast was revealed in the fifteenth centaury when the Portuguese tried to occupy this region. Reflecting those anecdotes of Baloch history, the Baloch hero Meer Hammal Jeayand of Kalmat Gwadar led the war against the Portuguese and defended Gwadar from being occupied. Even after constructing their forts in Jivani and some other parts of Gwadar, they couldn’t invade the Baloch coast.

Later by the end of the eighteenth centaury, the Khan of Kalat Meer Naseer Khan I granted the charge of some areas of district Gwadar beginning from Karwat in the east to Robar in the west and Dramb hills in north to coast in the south to the Sultanate of Oman under a treaty. Due to its important location, Gwadar had one of the busiest ports of the region during that era. It was used for national and international trade and was linked with most of the Middle Eastern countries as well as with a few north East African countries, India and the Britain.

Before the mid of 1950s, Gwadar district was discovered as a magnificent spot for a sea-port. This increased Pakistan’s interest toward the Baloch coast. However because most other parts of this district were under the control of Oman, Pakistan considered Jivani suitable for this project in the beginning.

Later Jivani was regarded as unsafe because of being very near to the Iranian boarder, thus Gwadar remained the center of attention for Pakistan. On 8th September 1958, Pakistan paid $3 million to the Sultanate of Oman to get the control of entire district Gwadar for a period of twenty years through a treaty among Pakistan, Britain and Oman. This mega economic project remained pending until the charge of Gwadar was completely given to Pakistan in 1988.

After getting the complete charge, Pakistan constructed a small port in Gwadar but the construction plan of the strategic Gwadar port was initiated by Nes Pak in 1995 as one of the goals for the eighth Five year plan in 1993. The plan of Gwadar port was officially acknowledged in 2000. China Harbor Engineering Company (CHEC) took over the charge for its construction. As the major investor China spent $248 million in the first phase of developing Gwadar Port which eventually topped $2.2 billion and was handed over to the Pakistani government in 2002.

In 2007 by the former president Musharaf, Gwadar port was handed over to Port of Singapore Authority (PSA) with the 40 years’ contract. But this contract could not be implemented completely therefore it was concluded in 2012. In February 2013 Pakistan officially handed the Deep-sea port operations to China. The Over Seas Company of China got the authority of the port in June 2014. So far only 1.4% work of the port’s functionality has been completed and the remaining 98.6% is still on its way.

China plans to replicate the model of Shanghai Free Trade Zone (SFTZ) in Gwadar. Since it has been used for countless economic and social reforms in China and had lent a hand in scoping economic growth of the country. It is regarded a perfect model to be implemented at Gwadar too according to the president of Pakistan-China Chamber of Commerce and Industry.

In a visit to Gwadar Press Club, the Chairman of Gwadar Port Authority Meer Dosteen Khan Jamaldeeni shared that this specific port is one of deepest sea ports in the world hence its dept makes it a safe port for the huge cargo ships.

The Government yet has to facilitate the port with basic facilities in agreement with the master plan but along with some other hindrances lack of resources has been a great hindrance to make the port fully functional. Port also requires infrastructure as roads, railway line and international airport hence working for those projects is still imminent.

According to the Chairman, Gwadar port as a major economic project can open new doors for development. Fully functionality of this mega project means more job opportunities and a better standard of life for Gwadaris. It can facilitate the central Asian countries, north western parts of India, most of the Arabian countries along with the Central European and north eastern African countries for cargo shipment and massive trades.

It will indeed be one of the safest international ports that will link various countries and will be able to serve large merchantmen for the up coming fifty years or more. Although China seems to be determined for the functionality of the port but the reality can’t be denied that fully functionality of Gwadar Port still remains a dream.

However, before making the port fully functional, the Chinese government intends to develop the social sector in Gwadar. Because through some level China is aware about the situations of Balochistan as a result with the intention to develop an understanding at the ground level, some Chinese officials have been meeting local representatives from social sectors from time to time to find out the concerns of the local people living here.

Through the years, Gwadar Port emerged both as a positive and a negative asset for the region. On one end it narrowed the distances between the metropolitan of Karachi by the Makran Coastal High way but on the other side it increased the restlessness among the nationalists and the Baloch militant organizations. The first blast in the history of the peaceful harbor town of Gwadar in 2004 killed three Chinese Engineers on the Fish Harbor Road followed a number of such attacks that disturbed the peace of the emerging town.

Besides being one of the reasons for the rise of political disturbances, Gwadar port had also been one of the reasons for land erosion in the near by areas of Gwadar. Due to the dept of the edges of Gwadar port, the waves don’t break in the south eastern part any more where the port has been constructed instead the high pressurized waves travel to the northern villages such as Sur Banden and other areas of the district. It has been the biggest reason for land erosion in the region for about seven years.

Fisheries as the key economic activity in the district, is the biggest source of income for the majority of the population in Gwadar. It has been a decade since the west bay of Gwadar had been blocked with large rocks as so called protection wall.

According to the master plan, in the coming years the west bay will completely be blocked and population living near the west bay will also be relocated to the northern areas of Gwadar because the Chinese Government intends to construct railway track “Express Way” from Gwadar to China. Many Gwadaris already had to leave their ancestral habitations and had been relocated to further places.

The protection wall had already been a hindrance for the fisher men folk. Their boats had been breaking due to the wind, rocks and lack of ecological corridors for placing the boats. Further as the “Express Way” project starts the west bay will completely be blocked affecting the deprived fishermen of Gwadar.

What the nationalists and the Baloch militant groups say is that they don’t oppose the port because it will bring the air of development in Balochistan but what they are concerned with are the destructions it will bring for the Balochs. They believe that when businessmen from other parts of Pakistan invest in Gwadar, the actual habitants of the region will eventually change into minorities.

2003-2005 are remembered as “The Years of Acre Boom” in Gwadar when half of Gwadar was purchased by large merchantmen. It will be another mega project of Balochistan that will benefit the federal government of Pakistan and besides being an easier way to reach the hot—water sea port; China will get the bigger economic revenue. It will be another example of the “Saindak’s  Copper and Gold mine Project” and “The Sue Southern Gas project” as they say. According to them when those two mega projects didn’t bring any changes in Balochistan other than becoming huge pillages of Baloch resources and benefiting federal government, Punjab and the China, Gwadar Port does not set any expectations for the Balochs either.

Gwadar port can not only be an important seaport for the world but it can be a great advantage for the development of Gwadar and Balochistan as a whole. The successful functionality of Gwadar port is only possible if the bigger share of the revenue generated from the port is invested for the social, educational, infrastructure and economic evolution of poverty tackled province of Balochistan, the human right issues are solved and the Government of Balochistan, the local people and Baloch nationalists are taken in confidence and are heard.

Mariyam Suleman Baloch is Staff Writer at the Balochistan Point. She writes in English and Balochi. She covers Balochi literature as well as social issues and human rights issues in Balochistan, She blogs at mariyamanalblog.blogspot.com.

Published in The Balochistan Point on November 28, 2014