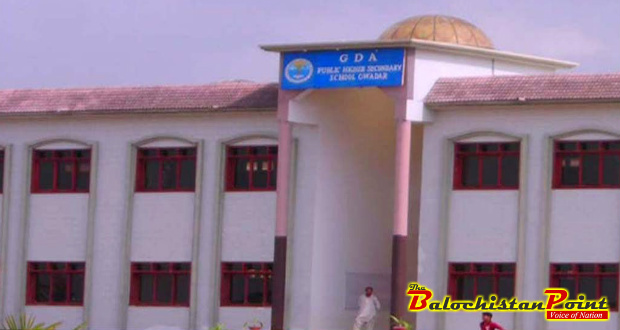 Gwadar – Students of Gwadar Development Authority (GDA) Public Higher Secondary School protested against the unjust policies and the misconduct of principal and a few teachers due to which a number of skilled teachers are resigning.

Students protested against the resignations of their most skilled teachers and refused to attend the classes, on Tuesday.

Skilled teachers of GDA School are resigning due to misconduct of Principal.

GDA School was established as a model school for the deprived people of Makran. Millions of rupees were invested in its construction work and it gets more than 3 million annually.

During the last few days two female teachers; an Urdu lecturer, the only PHD holder assistant professor of Urdu and a Math Lecturer resigned from GDA School.

Teachers resigned after facing mental torture and misbehavior of Principal and a few teachers backed by him, learnt Balochistan Point.

Balochistan Point has learnt that teachers backed by the Principal are incompetent. 80 percent students of Chemistry teacher, which is backed by Principal, failed in pre-board exams of 9th and 10th grades.

“Favorite teachers of Principal are not only playing with our future but also destroying the dream of a great school that was recognized by the government of Balochistan and Gwadar Development Authority,” a student told Balochistan Point.

Along with the teachers who left, two more lecturers including a lecturer of physics and Pak-Studies are expected to resign.

In the resignation letters, teachers have stated three main reasons; misbehavior of principal and mental torture by the four fellow teachers and discontinuation of the salary and threats by the principal, learnt Balochistan Point.

Principal Colonel (Retired) Saeed-ur-Rehman, who joined the office on 1st June this year, terminated the Islamic Studies lecturer, a local resident of Gwadar, during summer vacations on 13th June without any valid reason.

On 16th June he released termination notice for the administrator and the office superintendent of the school.

Students have threatened to boycott classes if Principal of GDA School is not sacked.

After a protest by the other employees, against the unjust activities of the Principal, School administration terminated three more lecturers and the Vice Principal.

Parents and students studying in GDA School have demanded from Chief Minister Balochistan, Chief Secretary, Education Secretary and the administration of GDA to terminate Principal and lobby of teachers backed by him.

“If our demands are not met then we will boycott the classes in GDA Public Higher Secondary School Gwadar,” warned the students.

Published in The Balochistan Point on September 8, 2015