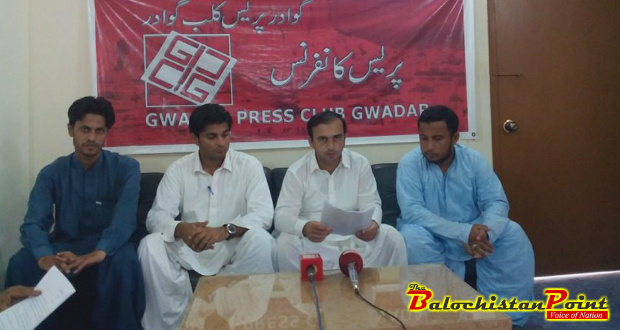 Gwadar – 1st September is the day when Gwadar Youth Forum (GYF) came in to being. Three years back from now, on first of September 2012, the dream of an organization like GYF became a reality. The founders of GYF include author, Arif Noor, Ibrahim Faraz and Sabir Hayat. Later a few more hardworking and sincere youth like Latif Basham, Naseem Malik Sajid Baloch, Sharif Ibrahim and Aziz Baloch became part of the cavalcade. The main goal of GYF is to end the ongoing injustices with the local youth and to provide them a society without discrimination or it can also be accurate to say that GYF came into existence because of the continuous negligence and discrimination of rights of the local youth.

Even now when we do have an organization to protect the rights of the local youth, yet their rights of employment are continuously being violated in different local departments hence GYF with its constant resistance has been successful to fight against such violation and is still on the go.

Along with struggling for equal rights of employment, Gwadar Youth Forum has also been working with a few more associations. Since violation of the right to employment is a more serious matter, the forum has relentlessly been working towards the cause more than any of its fellow associations.

Discriminating the youth of Gwadar, holding up the employment opportunities, bribery, corruption, labeling the vacant posts and putting them up for sale are just a few violations that the forum has been resisting for and standing firm to wipe out such social brutalities from Gwadar.

Biggest problem faced by youth of Gwadar is deprivation from right to employment.

Taking a look at the great revolutions of the world, we’ll find two similar facts. First, every revolution was outcome of injustices, cruelty and violations and second, youth has a significant role in every revolution. Youth play the role of backbone or the most important part of the nation therefore having literate and aware youth can be the reason of triumph for a nation and that specific nation can eventually play a significant role for global development joining the other successful nations of the world.

Today under the platform of GYF, the youth of Gwadar expresses its unity and awareness which was rarely seen in the past. Although there were several movements, but continuity was the fact they lacked. Albeit, GYF with constant efforts has always been on task to achieve its target and is still moving on.

GYF with its short history of three years has been the most active rights defending organization of the region. For instance, compared to any other organization of the district, GYF perhaps will be found with 50% more activities. Employment, a basic citizen right which was neglected in the past, youth had to endure unemployment and disappointment while vacant posts were sold however the political and social organizations kept silence. If hardly anyone from them unlocked their voice against such violations that too was only limited to getting a family member employed. If hardly any common youth got a job, that was either lowest as watchman or highest merely as a clerk.

A new hope approached just after the inception of GYF. It is not that uncomplicated and simple to violate the rights of the Gwadar Youth anymore. GYF is not only standing against the illegal recruitments but it has also given strength and a voice to the previously unheard youth of Gwadar. Today every youth of Gwadar recognizes the forum as their only trustworthy right defending organization.

Many organizations in other districts have replicated the model of GYF

The effectiveness of the activities carried by the forum and their positive outcomes became the reasons of its popularity. Today the traces of GYF can be seen in other districts as well. Many new organizations came into being after GYF which are its replicated forms. Hence not only the common citizens but the political leaders are also now constrained to support the cause.

Along with right to employment, GYF has played a major role for educational activates as well. The forum has been successful in carrying out career counseling events from two years. Professionals from different fields are annually invited to share their experiences. This helps the youth to discover their passion and move toward a brighter future. The forum has also conducted workshops and seminars for international scholarships. Alumni of different scholarships have been invited to share their experiences and encourage other students from Gwadar to apply.

After the announcements of the recruiting process for teachers by the department of education, GYF conducted NTS preparation classes for the interested candidates. Many of the candidates who took the classes were among the high scorers.

Protection of Right to Citizenship:

The Forum has not only been limited to local community but several wrote articles about its activities and that encouraged the volunteers to stand against each injustice. GYF is moving forward with its struggle to prepare a camp with talented, aware and informed youth that will enlighten the future of Gwadar. Today not only the youth, but people from all professional fields and age groups admire the persistent efforts of GYF.

The three year’s journey of GYF demanded immense determination. Despite challenges that kept knocking off the flight of the forum, the members of GYF kept on their struggle. During this journey, the reality of the society became clear and with this the real faces of the so called champions that claim the social rights for self benefit also came forward. Their corrupt policies were brought forth, with this the community now knows that just for the sake of getting elected and reaching to the national and provincial assembly they presented their fake protocols.

In this fight of right, GYF is standing firm for every kind of challenge which they had previously gone through in the past as well. GYF has received threats and many times people tried to bribe the members to stop their resistance but none of their actions could stop the unending hard work of GYF. This proved the effectiveness and the rising spirit of the team and their cause.

Published in The Balochistan Point on September 4, 2015