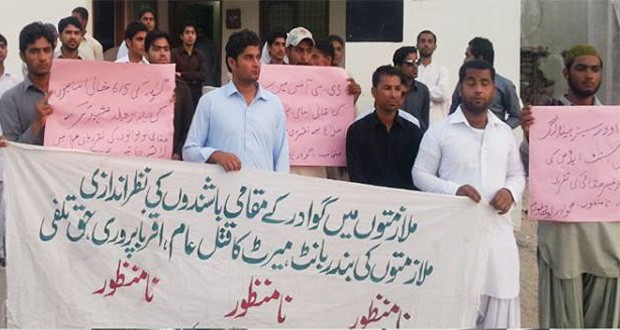 Gwadar Youth Forum: A Ray Of Hope For People Of Gwadar

Gwadar – Gwadar a coastal district of Balochistan is famous in the word for its deep-seaport project. The numerous problems which inhabitants of Gwadar face on daily basis are not known beyond the borders of the district. In such a situation, Gwadar Youth Forum (BYF), a community social welfare organization mobilizes youth on daily basis to raise voice for problems of Gwadar.

GYF was established in August 2012 by the motivated and energetic youth of Gwadar to raise voice for problems of Gwadar including unemployment, illiteracy, drugs and lack of recreational facilities. Today, GYF has over 500 members and the number is increasing with passage of every day.

The Balochistan Point talked to Barkatullah Baloch, The President of GYF. He discussed in length the problems faced by people of Gwadar and what GYF is doing to highlight those problems. 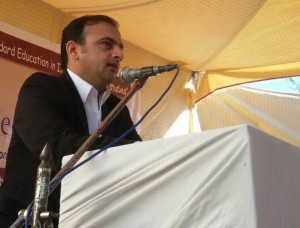 According to Barkatullah Baloch, unemployment is a major problem in Gwadar. Number of graduates is increasing but the number of jobs are only few. Candidates of other districts are recruited on vacancies that are reserved for Gwadar. GYF regularly protests against such unfair recruitments. “Sometimes our protests work and appointments are cancelled and sometimes nothing happens,” said Barkatullah Baloch.

President of GYF blamed provincial ministers and secretaries for recruitment of their men from other districts on jobs of Gwadar. He revealed that for a vacancy of Admin Assistant in Gwadar Port Authority, a person from Sindh was recruited. In such a situation GYF and people of Gwadar in general are left with no choice but to register their protest.

GYF understands the importance of education and conducts different awareness programs for students. Barkat Baloch said that GYF organized a month long workshop to prepare the candidates of Gwadar for the NTS test for recruitment in education department vacancies of Balochistan. GYF is probably the only community organization in entire Balochistan that has conducted such a training program free of cost.

Lamenting the status of educational institutes in Gwadar, Barkat Baloch said, there is only one Degree college in Gwadar and even that doesn’t have proper arrangements to impart education to intermediate students.

Scene of a counselling session

Counting down the future plans of GYF, Barkat Baloch said that GYF plans to conduct career counseling session at district level in Gwadar. People from outside of Gwadar will guide students of Gwadar in these career counseling sessions. GYF also plans to establish a digital library for female students of the district. “Female students are restricted to either homes or schools and a digital library would allow them to enhance their leaning abilities,” Said Barkat Baloch.

GYF promotes recreational activities in Gwadar so that youth can be kept away from using drugs which are easily available in the districts. In the words of Mr. Barkat Baloch, when youth of Gwadar doesn’t get jobs and become disappointed they easily become drug addicts. This reflects the failure of Balochistan government on two accounts; no action against drugs peddlers and unavailability of recreational opportunities.

Problem of availability of clean drinking water is common in Gwadar. Barkat Baloch explained that only source of drinking water for Gwadar city is the rain water which is stored in Ankara-Kore dam and supplied to household. If there is lack of rainfall in one season then people of Gwadar face drought like situation. It’s so shocking to known that Gwadar city which is home to world famous deep-seaport project doesn’t have sufficient drinking water. GYF under leadership of Barkat Baloch has raised voice against this problem several times in the past. 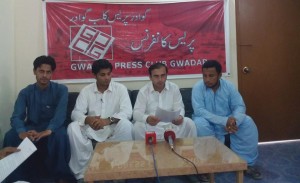 “People of Gwadar are totally disappointed from Gwadar deep-seaport and China-Pak Economic corridor (CPEC) project, there has been zero improvement in our lives,” said Mr. Barkat Baloch when asked to comment on CPEC. He demanded that A Youth Development Authority (YDA) should be established as a part of CPEC to help in resolution of problems of youth of Gwadar.

GYF is working for the social welfare of one of the most backward districts of Pakistan. The enthusiasm of its members and supporters is unparallel in rest of the country. However, when it comes to donor agencies deserving organizations like GYF are ignored and those social development organizations that have been formed to earn profit get the donations.

Disclaimer: Views expressed in this article are those of the interviewee and The Balochistan Point not necessarily agrees with them