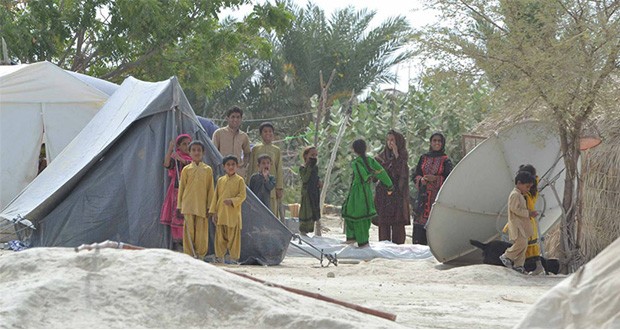 The people of Balochistan are marred with all kinds of problems, ranging from the perpetually deteriorating law and order situation, to the massive load shedding of electricity. While the issues continue to pile on top of another, some say that Balochistan’s government is slowly losing its capacity to tackle them.

While the reality is bleak for the average Baloch, the situation is much worse for the victims of the 2013 earthquake that left the people of Awaran district utterly helpless.

On September 24, 2013, a 7.7 magnitude earthquake flattened the Awaran district. The calamity resulted in the deaths of over 500 people, and rendered thousands more homeless. According to reports, 90 per cent of the entire district was destroyed. Immediately after the earthquake, relief activities commenced and dignitaries such as Prime Minister and Federal Cabinet members visited Awaran and made promises to help. Unfortunately, 17 months on, most of these promises are yet to materialise. 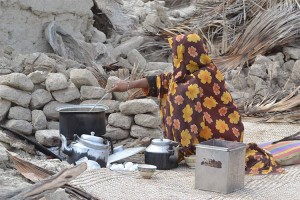 During his visit after the earthquake, Prime Minister Nawaz Sharif announced that Awaran would be made a model district. He promised to install three solar-powered electricity grid stations to provide electricity to the area. Sharif also promised to provide scholarships to students from Awaran so they could acquire a decent education. Developmental work on the roads and other infrastructure would be undertaken, according to the PM.

The Prime Minister’s brother, Chief Minister of Punjab Shehbaz Sharif, promised to build three Danish Schools in Awaran, along with a state-of-the-art hospital. Federal Minister of State for Petroleum and Natural Resources, Jam Kamal, announced that the government would set up a gas plant for the people of Awaran.

Yet it would appear that there has been no progress, no development and the people of Awaran are still waiting.

Malik Riaz, a real estate giant, offered to help the people of Awaran. Bahria Town schemes are famous all over the country for their quality and state-of-the-art homes. Riaz pledged to create one of these schemes in Awaran for those rendered homeless by the earthquake.

Chief Minister of Balochistan, Dr Malik Baloch, laid the foundation for the housing society in January last year. However, a year later the philanthropic work undertaken by Riaz has not materialised in Awaran. 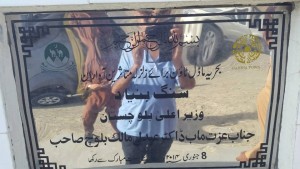 Inauguration board of Bahria Town Awaran

Meanwhile the people of Awaran have built temporary homes for themselves. Awaran was not a particularly well-developed area even prior to the earthquake. It did not take a lot of resources to rebuild homes in the region. A Rs. 4 billion reconstruction project was initiated by the federal government to finance homes in the area. Under the project, every household is to be paid Rs. 220,000 in three instalments. However, people are complaining that it is almost impossible for them to collect a single instalment owing to bureaucratic red tape, leading to concerns that corruption is following this funding.

Shahbir Rakhshani , a native of Awaran, believes that the major predicament faced by earthquake survivors is their economic plight. Rakhshani maintains that agriculture is the main source of livelihood of the vast majority of people and no efforts have been made to improve it in the aftermath of the earthquake. When asked to point out urgent actions required, Rakhshani noted three: Provision of electricity; provision of fertilisers to farmers on subsidised rates; and the development of an asphalt road connecting Awaran to the Turbat district of Balochistan.

Remedies to the appalling conditions under which the people of Awaran seem to elude the Balochistan government. No allocation was made for rehabilitation in the last fiscal budget. It was the duty of Dr Malik and his team to help the earthquake victims in every possible way. It is also their duty to knock the door of Federal government and remind them about the promises made to the people of the district. In this, the government of Balochistan could be said to have failed.

The Sharif Brothers made huge promises for development of Awaran, but these have not materialised. People are still waiting for the Danish schools, hospitals, solar-powered grid stations, and gas plants.

While the other promises needed immense work, scholarships for the students in Awaran required very little effort, and even that is yet to materialise.

It is troubling that some see this failure as being symptomatic of federal government apathy, not just towards the people of Awaran, but when it comes to Balochistan at large.

In order to prevent further human catastrophe from taking place, authorities should start addressing the problems at hand. Failing to do so will further aggravate the sense of deprivation prevalent among the people of Awaran and intensify the already existing insurgency in Balochistan.

Republished in The Balochistan Point on February 28, 2015