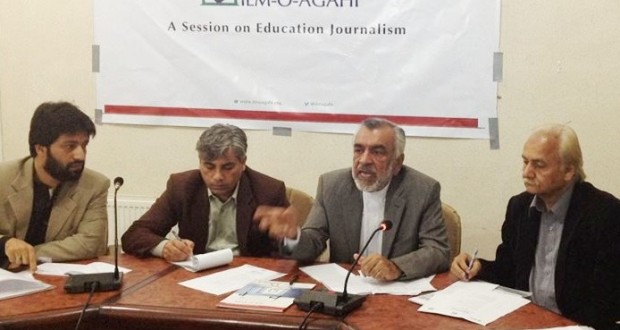 Half of the settlements in Balochistan don’t have schools: CM Advisor for Education

Quetta – 03 April, 2014 – “Half of the settlements in Balochistan don’t have schools and government is aiming 300 new schools and upgrade 300 primary and 300 secondary schools in Balochistan, Balochistan today needs more emphasis on education sector and media should also follow suit”. This was stated by Advisor to Chief Minister for Education, Sardar Raza Mohammad Bareech, at the ILM-o-AGAHI education journalism workshop held in Quetta Press Club, today.

The ILM-o-AGAHI, one day workshop was organized by Mishal Pakistan in collaboration with

Ilm Ideas (a 3 year UKaid funded program). More than thirty education reporters from all leading media entities, from print, television, radio and online journalism, were selected for the workshop.

While discussing on current scenario of education, Suleman Raja, Assistant Professor, Department of Journalism, University of Balochistan said almost one-half of Pakistan’s adult population is unable to read or write limiting opportunity towards acquiring skills and technical knowledge for enhanced productivity. School enrollments are low and school dropout rates too high. “The budgetary allocation to education has remained around 2% of GDP for the past decade, with a high proportion being spent on recurrent heads mainly salaries, leaving a small amount for quality enhancement such as teachers training, curriculum development, provision of school facilities and monitoring and supervision of education” he added.

Award winning senior journalist, Mubashir Zaidi, while talking how journalists should pitch their stories to their editors, said that “Pakistan’s media should play an active role in promoting education for the marginalised segments of the society as it can help to eliminate economic disparity through the introduction of quality education”.“New entrants in the field of journalism should therefore strive to sensitize the people on the importance of education, as education is the key to success for progress” he added.

Asif Farooqui, Program Manager, ILM-o-AGAHI, while discussing the salient features of the initiative said that, a learning platform for journalists on education would be developed as a ready reference for journalists working on education related issues “The objective of ILM-o-AGAHI initiative is to encourage journalists to create narratives which enable equal access to education for all while analyzing the policy reforms within the education sector and aimed to strengthen institutions” he added.

Ahsan Mukhtar, senior Blogger and manager google business group Islamabad, spoke on the art of story-telling through social media. He said in the age of social media, journalism has seen a paradigm shift with the advent of citizen journalism where everyone is in some way involved in spreading news around. Social Media has broken all social and cultural barriers and has extended the reach of a journalist globally. The role of social media in digital storytelling is crucial. Finding a news, verifying it and publishing has seen a revolutionary change and has helped take transparency to better levels.

Through the ILM-o-AGAHI initiative, 18 education journalism workshops will be held across Pakistan for education reporters to increase their capacity and improve the coverage on education issues in media. In each workshop, more than 30 education reporters will be selected to enhance their capacity to report on identified educational challenges and issues to improve understanding and skills among journalists to capture community’s perspective and voice including children’s voice.

Mishal Pakistan is the partner institute of the Center for International Media Ethics and the Global Competitiveness and Benchmarking Networks of the World Economic Forum. Mishal assists the forum in creating soft-data on Pakistan, identifying Pakistan’s competitiveness challenges including primary health & education and higher education.

Published in the Balochistan Point on April 3, 2014