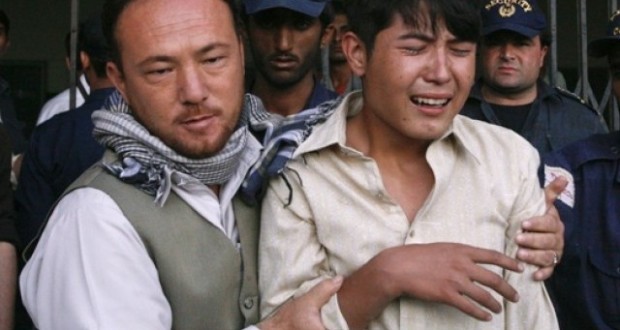 Hazaras: Fault In Their Faces

“Hazaras, you know, are our ladla babies,” said one of Quetta’s senior most police officer earlier this month. “We’ll do anything to protect them.” He was giving an off the record briefing and went into some detail about the number of security cordons he had thrown around the Hazara community in Quetta, particularly Hazara town. And what about their movement? Students, traders, office workers? Students going to the university, according to the police officer, got a police escort. The problems of food delivery were discussed. “Even the vegetable vendors get police escort,” he said triumphantly. And then like a true philosopher of law and order he went on to explain: “Do you know the basic problem with Hazaras? They look different; because of their features, they are easily identifiable.”

On Thursday, when eight of those pampered babies, with different features, were gunned down while buying fruit and vegetables, Quetta’s police was quick to absolve themselves. “We offered them escort, and they just didn’t tell us.” Blaming the victim is the oldest sport in the country but here the law-enforcers seemed to be saying that if Hazaras are so fond of becoming martyrs, who can stop them?

Haji Abdul Qayyum Changezi, the head of Hazara Qaumi Jirga and a survivor of many Hazara massacres, still thinks there is a way to stop it. Earlier this month, in his Hazara Town office, he was surrounded by fellow survivors. A man had lost his entire family. “Yes all of them,” the man shook his head and refused to say anything more. Here was a transporter who had lost all his business. An eight-year-old kid with a scar across his face who lost his mother in the Mastung bus massacre. “I was sitting in the front of the bus playing with my brother, my mother was at the back,” was all he could remember. Homes in Hazra Town were full of teenagers who couldn’t go to university and their parents who couldn’t go to their jobs while amateurish looking gunmen sat on streets corners trying to do DIY security.

Haji Changezi tapped on a pile of national Urdu dailies published from Quetta and pointed to headlines that he had highlighted; in various poetic forms inciting the murder of Shia Hazras. “Whenever these headlines appear, an attack on our community follows. Can anyone stop these headlines?” A young man in the office opened the Facebook page of a banned sectarian organisation and played a clip from a rally held recently in Quetta stadium. A singer sang a composition declaring all Shias kafir. Speakers following him did the same in blood-curdling prose.

Liaqat Ali Hazara, the transporter said that he had approached the military authorities to resume his business. “Give it to us in writing that if one of your buses gets attacked you’ll not protest again and sit on the streets with your coffins.”

He is still considering the offer. “There are some drivers who are willing to drive my buses. They are saying if we are going to die sitting in our homes then we might as well die working. Also if you are in a moving bus maybe you have a better chance of survival.”

Another young man complained that non-Hazara bus drivers had started refusing Hazara passengers. “They think we are a security threat. Sometimes they charge us extra.”

When Balochistan government officials say that ‘security is tight’, they are really not exaggerating. The road leading to Hazara Town has not one but two FC posts manned by super alert jawans and officers who ask the same question thrice; the kind of vigilance you are not likely to see off a battlefield. The rest of the entry points to Hazara town have been sealed by building concrete walls. It might still be called Hazara Town but it looks more like an internment camp.

“They have found a great way to keep us safe,” said Haji Changezi. “They have made us prisoners in our own homes. If I want to go to my neighbourhood shop, I can’t because there is a wall on the way now. A few days ago I tried to walk past the checkpoint and they had their guns pointed at me. You can’t leave without your gunmen. Not even ten steps. No.”

But even internment camps need fruit and vegetables.

Many Quetta bureaucrats seem genuinely concerned, sometimes even baffled at the viciousness of attacks against Hazaras, at the same time they appear understanding, if not approving, of their killers. “I used to be able to reason with these people when I served in Punjab but here they just don’t listen,” said a police officer referring to the kind of people who hold huge rallies in Quetta city and wax lyrical about killing Shias, eliminating Hazaras.

Official after official in Quetta reminds us, in tones dripping with regret, that the basic problem with Hazaras is that they are easily identifiable. As if the fault in their stars were their looks, and not their faith. As if, somehow, if they started looking like everybody else their killers would leave them alone. Those who murder the Hazaras are loud and clear about their reasons. The people who are tasked with protecting them are still shy of naming their killers, let alone confronting them publicly.

After Thursday’s massacre, one can almost hear one of these officials saying. “The real problem with Hazaras is they want to go and buy their own fruits and vegetables.”

Republished in The Balochistan Point on October 24, 2014