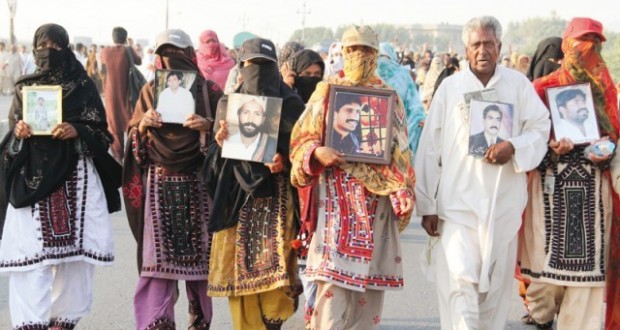 Since  merger of Balochistan with Pakistan , a grand strategy has been adopted by state to oppresses and plunder Baloch resources with the force of power. Whenever Baloch move to protect their resources, language and culture, they are disappeared or killed allegedly by state law enforcement agencies.

The Baloch movements for their rights gifted thousands of Baloch tortured bodies, thrown in barren mountains of Balochistan and thousands are kept in different torture cell by inter service intelligence. The Voice for  Baloch Missing Persons’(VBMP)  leader Mama Qadir Baloch with his conscious effort has launched a long march from Quetta to Islamabad to highlight  the human rights violation in unrest province of Baluchistan and rise  his vice against the endless  abductions, extra judicial killing, kill and dump policy and recovery of bullet riddled bodies of innocent Baloch writers, students, scholars, doctors and political activists.

Hopelessly, Mama  Qadir Baloch has launched  the second phase of long march from Karachi to Islamabad. Mama and his commitments pinned the hopes for missing family’s member after this long march their beloved will be recovered.

The implementation of the universal declaration of human rights is only a dream in Balochistan. The Voice for  Baloch Missing Persons leader Mama Qadir Baloch with historical long march want to draw the attention of international human right organizations to take a better pill to human rights violation in  Balochistan.

Umar Baloch is a student and lives in Hoshab  Turbat, Balochistan

2013-12-29
admin
Previous: Political parties to stage a sit-in outside Parliament against abductions in Balochistan
Next: Sanctity of Information