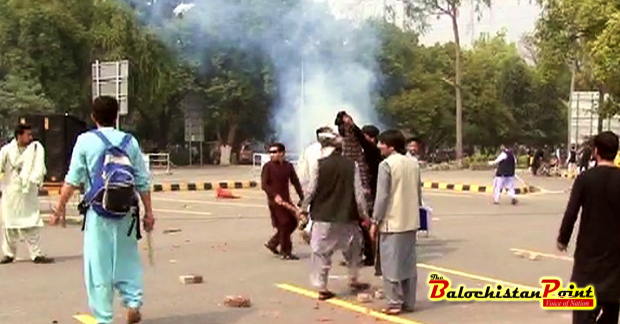 Hooliganism of IJT in Punjab universities

Islam is protector of peace and No Hadith, verse instructs followers to suppress propagation of any sociable culture. The only culture which is abominable in Islam is culture of Terrorism but near to Jumiat-i-Islami , only off-putting culture is of Pashtuns and Baluch.

On the joyful day of March 22, Students of Punjab University Lahore were feting their culture. In underway ceremony, Students were skipping about and performing Folk-dance in a dovish way. There was no any sign of Anti-social activity. However, all of a sudden, violent fracas unfolded. Students of Islami-jumiat-i-Thulba ploughed into unarmed attendants and began to batter Pashtun students. Shortly after the onset of unilateral fistfight, many students were lethally injured. Now place able question is; what is impetus behind the fearlessness of this thuggish group.

To find out its answer, one has to go in retrospect. On 9th February 1984, General Zia-Ul-Haq imposes a ban on student unions in all colleges and universities throughout country. Near to some conspiratorial historians, America gave F-16s to Zia and in turn directed him to ban student unions. Whatever the reason was, this despicable decision put Nursery of leaders in hibernation.

These student unions were unhindered by any ethnic identity. Whosoever did want to embrace a socio-political identity, he would. Nonetheless, after outlawing student unions, students began to stratify into ethnic groups. This deep-seated ethnic identity ultimately prodded them to clasp religious or ethnic bigotry.

According to Paul collier, ” a society can function perfectly well if its citizens hold multiple identities but problem arise when those sub-national identities arouse loyalties that override loyalty to the nation as a whole. In the society of the bottom billion, ethnic identity usually trumps national identity”.

Unfortunately, society in Pakistan is perfect embodiment of ethnic fault-lines and specifically, these divisive lines are on the way of constant aggrandizement in universities where lack of unions compels students to canalize their cult of activism in ethnic and maximalist groups.

Greatest advantage of banning student unions went directly to “IJT” students wing of Jumiyat-i-Islami whose modus operandi is intimidating students who underscore cultural and civic values, while Punjab police seems to complicit in hooliganism of this particular students wing and if police desires to confound said nexus than it should penalise IJT handlers.

An attack on “Cultural Festival” is akin to attack on a culture and no identity can condone such an onslaught on its culture. It is high time for government to revive student unions and displace ban from unions to Religiously-bigoted groups.