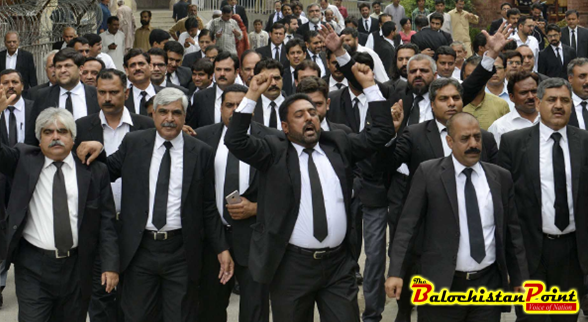 “The devil’s disciples have descended on Balochistan with full force this year, their evil mechanization on naked display in the gory games being played within the region’s strategic depths “quoted former IG Police Balochistan Tariq Khosa. While a span of less than a year has yet to be lapsed when the “devil’s disciples” turned peaceful Quetta valley into an atmosphere of ceaseless moon and groan. The dead bodies were strewn on the ground under an open sky, soaked in the blood.

The despicable mayhem executed in the heart of Quetta which devoured 72 precious peoples of their lives and left as many as 115 peoples wounded. Beyond doubt, the heart-rending carnage cast a heavy pall of gloom across the province and created a vacuum of intellectuals which will take decades to fill in. The single bang of explosion drained out entire intelligentsia of the beleaguered province in a few quarter of a minute. This however, was not the first time when the jugular vein city of the province has wrecked by perpetrators rather on a number of occasions the beautiful valley inflicted to the similar  ill-fate.Just three monthes after this tragic incident, terrorists from proscribed Lashkir-Janghvi al-Alami (LJ-A) stormed sprawling Police academy in Quetta and mowed down atleast 61 cadets.It is as clear as day that lethal terrorist outfits are functioning under different brands can nimbly target any public or governmental spot.

Needless to say that violence in Balochistan is multifaceted and orchestrated by variety of factors including separatists, religious extremists and others. But it does not utterly exonerate our intelligence sleuth to shroud its own failure under the shade of trimming such lame excuses. Neither passing buck on neighboring countries nor inimical political point scoring can amicably sort out this hydra-headed problem of terrorism which engulfed the impoverished province. In the same breath, one thing is quite appalling to divulge here that provincial Government is not on the same page with military top brasses to launch discriminative combing operation. The civilian institutions seem reluctant to work under the thumbs of federally imposed Frontier constabulary. Consequently, the orchestrators easily find the opportunity to fulfill their nefarious designs in order to play havoc in the lifeline city.

It may save to say that Quetta has persistently remained at the throes of inextinguishable nuisance for the last six years. The criminal negligence of both Federal Government and Provincial Government is no more tolerable to the local populace. Decades long sense of deprivation is no more eroding by cosmetic measures and temporary solace. The tempest of public resentment and anger is no more tractable by merely paying lip services to the deeply entrenched problems of Balochistan. Gone are the days when the people of Balochistan were hoodwinking in the name of parochial social and religious ethoes.

Against this backdrop, it is an established fact that provincial institutions are impotent and toothless to cope with scourge of terrorism. The delicateness of Provincial Government lies on the fact that it cannot even devise budget summary without intervention of IG Frontier Constabulary. The helplessness of Provincial Government can easily be fathomed from the statement given by its home Secretary before parliamentary committee:”Balochistan has become cocktail of insurgencies, religious extremism and other criminal activities. We cannot hide that the system has failed…”Apart from aforementioned, the remedy is sought through draconian administrative pre-1958 powers under Frontier Crimes Regulation to combat terrorism and organize crimes in the province. It would yet another recipe for failure as provincial administration jeremaid its lack of legal power in war zones.

Nevertheless,a judicial commission was made by Supreme Court under supervision of Justice Qazi Faiz Isaa to dig out the causes of gruesome Quetta attack. The judicial commission compiled its report after long and onerous 56 days thorough examination by obtaining responses from all relevant ministries, departments and institutions. The report unequivocally says that Interior Ministry miserably failed to combat menace of terrorism in the country especially under the purview of Quetta carnage. The report states that the National Counter Terrorism Authority (NACTA) completely proved dysfunctional in order to dismantle the network of terrorism. In addition to this, the comprehensive plan chalked out as a result of ghastly APS carnage is not yet to be implemented in its letter and spirit. The report finally concludes that open paradoxes are found between statements of Home Ministry and IG FC which undoubtedly shows that Civilian Government is not in good terms with Frontier Constabulary.

Meanwhile Balochistan has prodigious geostrategic importance in the realm of China Pakistan Economic Corridor. Therefore the security of the province should be on the topmost priorities of Federal Government in order to fully reap the benefits of mega-CPEC projects. The Civilian Government and security related state agencies should sharpen their own efficiency to foil every nefarious design of the enemy. The civ-mil leaderships should bury their internal hatchets and work shoulder to shoulder for the prosperity and stability of the country. The installation of CCT cameras should be made necessary on all the sensitive spots. Last perhaps not least the police department of the province must be made proficient and active through allocation of resources and various capacity-building measures. Without learning from past mistakes it would be very hard to disavow the chances of such devastating macabre in future.

2017-07-29
admin
Previous: Hepatitis, Its Causes and Prevention
Next: Cancer Hospital in Balochistan: Cancer to be fought not to be faced