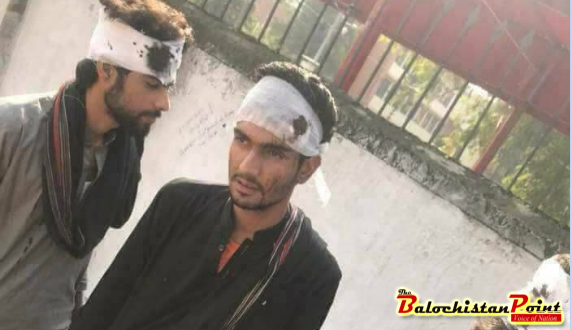 Hostility against Baloch and Pashtun Students in QAU Islamabad

On October 5th morning Quaidian Students Federation (QSF) which includes Baloch, Pahstoon, Sindhi, Sariki & Punjabi students councils, all conducted a collectively protest against the QAU administration for their demands. Students stood together and did not let the university open for the classes.

Police filed a FIR against 37th students who were protesting for their demands. They were forced to stop their protest but they denied the warning and continued.

After the acceptance of the demands, the Quaidian Students Federation called off their strikes. However, the Baloch Students Council QAU Islamabad continued peaceful protest for the thirteen demands, which is restoring the expelled students. The Pahstoon students ensured to support them.

More than 2000 police officers entered in the university arrested the wanted students whose names were listed in FIR. The police forces raided the camp of Baloch & Pahstun students who continued their peaceful protest for the restoration of their fellows, who had been by administration. They were brutally beaten up and many were critically wounded where more 60 students were arrested.

The injured and police custodians students are still optimistic about their demands and they are looking forward the QAU administration to fulfill their demands.

A senior Baloch student talking to the scribe told that the students who had been expelled by administration were in their last semester or some were in 6th semester. “If we do not protest and ask for their restoration then they will not be able to get continue their education and get degrees because they have spent many years of their life and money to get education. Degrees however they came along from a very long distance and spent lots of money that would be ridiculous. If they would not be restored,” he added.

The attack on the Baloch and Pashtun students was strongly condemned though out Pakistan by human rights, social activists, students’ organizations, lawyers, and teachers. Protests were held against the brutality of the Islamabad forces to the student.

QAU’s current mess is epitome of the crises faced by higher education in public sector. Poor classes are losing access.Release the students.

Baloch students are always facing such hostilities by the government or by the educational administration. In March 2017, when Pashtun & Baloch students were celebrating Pashtun Cultural day and they were attacked by Islamic Student Organisation (Islami Jammiat Taleba – IJT) where 5 students were injured. However, no one was arrested and from government side no one condemned it. It seems like the discrimination is rising up against the Baloch and Pashtun students. Baloch and Pashtun students who always struggle to get education.

The hostilities against Baloch and Pashtun students should be brought to an end. The right to protest is the constitutional privilege of every citizen. The concern authorities should have a dialogue with the Baloch and Pashtun students and they should be given their right. Torturing unarmed Baloch students will increase more feelings of alienation and deprivation among the Baloch people.

Published in The Baloochistan Point on October 29, 2017