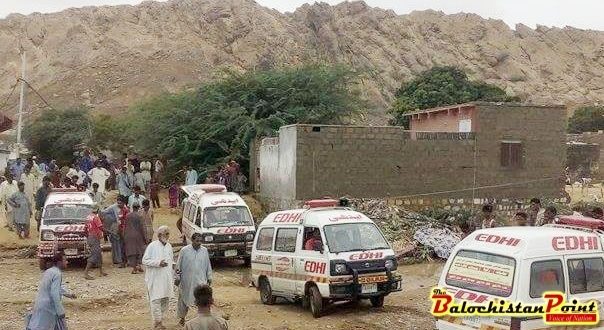 Hub Chowki is thesil of district Lasbela, where more than 400 hundred factories are running as for providing employment to people, from these 400 hundred factories 200 are registered which in terms of employment providing job opportunities to local communities. Because of industries, the city is known to be an economic hub of Balochistan, and most of entrepreneurs call it mini Karachi so as to be business generating city.

Industries are available near small communities in Hub Chowki where poor Baloch communities live and bear industrial wastage as to be indulged in heart and other diseases, what industrialists, political representatives and local stakeholders are doing is divergent from public relief.

The raucous sound of people is suppressed, corporate social responsibility which is objective of every business plan before launching a firm to protect people is first priority of entrepreneurship but here it is ironic, the industrial wastage and employing local people is overlooked by business giants and in response what political figures are doing is another misery for poor people. Both political leaders and industrialists seem to be responsible to ill fate of local communities. Years have gone; locals are under infliction of employment. Those local who live few steps far from industries are not supported, they are caused more miseries by industrial wastage and land grabbing.

Daroo Hotel, a place which is few steps far where big national and multi-national industries are present, there is scarcity of water and people seem to have been inflicted in disease due to not caring corporate social responsibilities as prime business policies, the industrialists are devastating the fate of local people.

Industrial wastage in terms of raw material is a big issue in Hub Chowki. Four days ago, a heavy rain fall destroyed small houses in Pathar colony which is located very near to Lasbela Industrial Estates Development Authority (L.I.E.D.A) and Lasbela Chamber of Commerce (L.C.C) despite a huge loss of losing houses and family members, the victims were not supported by them, even though losing thirteen family members and others wound in the flood.

Flood came to Pathar colony because of slope of water through canal. The more annoying is that all industries waste water flows in the same canal which directly affects local communities that reside beside the canal. Pathar colony is very near to this canal and has been largely suffering region by rain devastation among the towns of Hub.

Surprisingly, misery for local communities is not today’s malaise; they are hopeless to take their plights to political leaders owing to adverse response by them. Stakeholders and political representatives are seen in doing land grabbing for their cronies which has caused heavy loss not only for Pathar colony also for the entire Hub city.

On the channel of passing of water illegally lands are sold whatever reaction the masses take it becomes a matter of myriad of problem for them due to influence of political leaders, the city is going towards more consumption of miseries. The implication of rain in foreseeable future seems more devastating.

It is time to control influence of political representatives of land grabbing and industrialists autocratic style of management to local communities. City can be remained prosperous if action is taken against elements which upsetting the infrastructure. The more negligence is as more sufferings from various alarming elements and natural disaster.

To stop this haunting major causes, local NGOs and media men should raise their campaign in order to awaken industrialists and political leaders to be sincere with communities and stop playing with their feelings. There are a number of NGOs working in district Lasbela if any of them raise the voice of local people, I hope the situation would be better in Hub, in this campaign media must in right hand to supporting NGOs. Hence system will not be better until local communities raise their cacophony for genuine plights to uplift the communities.

Published in The Balochistan Point on July 2, 2017