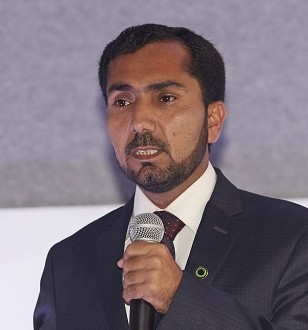 I have been advocating for the rights of religious minorities and marginalized groups in my area since I became a human rights activist and a development professional. Still, there is much more to do, as it is just the beginning. It is really very discouraging for me and my friends that the indigenous Hindu community is leaving their place of birth, Balochistan, due to religious extremism. Unfortunately, we are on a triangle bordering Afghanistan and Iran, which means we are surrounded by religious extremists.

Hindus have been richly contributing to Balochistan’s economic prosperity and development since pre-patrician days. They are traders, shopkeepers, and have owned export and import businesses since before the Partition [the division of British colonial territory that created India and Pakistan]. Many of them are educated and offering valuable services in the fields of education, health, and other departments. Moreover, the community is widely regarded as a peaceful people.

In Balochistan, Hindus have two historical and famous sacred places that belong to ancient times—Hinglaj Shrine located in Balochistan’s Lasbela District and Kali Devi in Kalat. At the time of partition, religious riots were rampant in the subcontinent, but Hindus were living harmoniously and peacefully here. Then, the Khan of Kalat respected the Hindu community’s rights in Balochistan and provided them with religious and economic freedom. Their rights safeguarded, the community remained in the region.

Currently, Hindus are living in all of the Baloch populated districts of Balochistan, but there has been mass migration from these districts: Kalat, Khuzdar, Quetta, Mastung, Lasbela, Hub, Noshki, Chagai (Dalbandin). Hindus, in spite of being Balochistan’s peaceful and largest minority, are running from their old “motherland” to escape persecution.

The longest border of the country on the north with Afghanistan and the west with Iran are becoming the second most dangerous areas due to the increase in extremist activity. The government cannot, it seems, control and monitor its borders, and we must take peaceful action to protect our minority communities. We need to educate our children and youth on human rights, peace, and brotherhood, as well as on our history of living peacefully with minorities not so long ago.

Although this project is dangerous and very difficult, my friends and I are confident and hopeful for a change. We will prepare our new generations to challenge religious extremism and create a peaceful and democratic society. So far, I have been able to organize some sessions in the community and organize training for youth of the area on the topics of “Democracy and Human Rights,” “Democracy and Minorities,” “Gender Equity,” and “the Role of Youth in Peace building.” In the last month, more than 100 youth have attended these sessions.

We need some revolutionary measures to bring prosperity, stability, and unity to this country. Education, founded in peaceful principles, is the only way we can accomplish this goal.  (Courtesy: worldlearning.org)

2014-06-23
admin
Previous: Balochistan Budget: A Set of Empty Promises
Next: Sawat in Makran