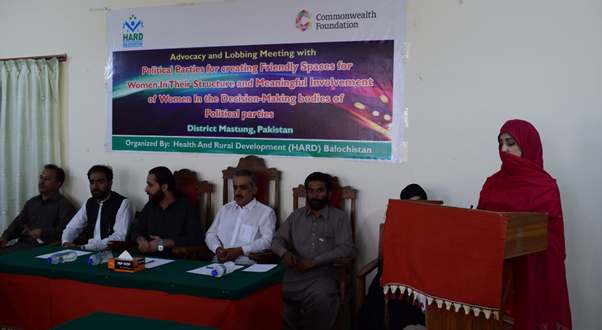 In the event, issues and concerns of women extremely less participation in political processes, joining political parties and even, less representation of women in party structure and decision making positions were raised with the political parties and their authorities. The CSOs and IDA women highlighted that male dominancy in political parties, cultural and religious values and norms as well as gender based discrimination and sexual harassment are the main issues hindering women to come forward to join politics and take part in electoral and democratic governance which are need to addresses within the parties and at all level in order that gender balanced ensured in political, electoral and democratic processes.

All key decision makers of parties, appreciated Commonwealth Foundation, HARD Balochistan and other CSOs efforts for increasing women participation in political processes and endorsed that first time an organization continuously not only mobilizing, even advocating and lobbying them to promote women participation in politics and adopt and implement women friendly policies within the parties and bring women on key decision making positions. All these efforts influenced us but made us realize that women have rights and we must have to bring them forward to advance their lives and help them in overcoming all challenges including CNICs and voting registration and in all other matters. It also realized increasing women participation in electoral and democratic governance can increase our vote bank and our strength at provincial and national level. Furthermore, they shared that they are already working and creating women friendly spaces for women after making commitment with HARD and IDA representatives in 2018 and 2019 that is why a large number of women joining political parties first time in the region and this process increasing day by day with help of women who already joined parties.

The representatives of CSOs and Women IDA endorsed that political parties are fulfilling their comments to some extent which they had made in previous meeting and again urged them to play their key role in bring women forward in politics. The event adjourned with the vote of thanks.

Published in The Balochistan Point on April 13, 2021