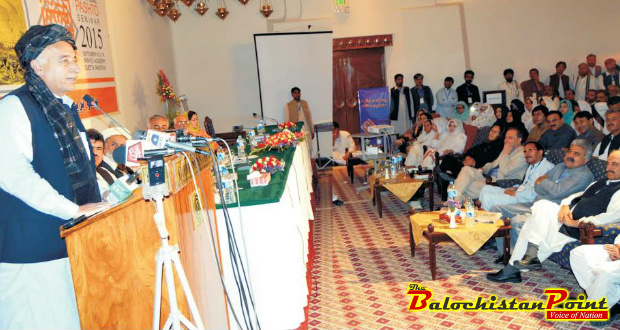 Pashto International Conference was organized by Pashto Academy in Quetta from 12th to 14th September 2015 with specific objective to analyze the issues of Pashtoon territories in context of education, peace restoration, Pashto as language consideration as curriculum language and linking legend Pashto writers, poet, scholars and Pashto lovers, on both side of Pak-Afghan border, with each other.

Pashto language conference was held under the title “Pashto Language, Globalization Opportunities and threats.” It was an important conference not because of its name but also because of the time chosen for it. After signing of China-Pakistan Economic Corridor agreement last year, regional political scenario is rapidly changing. “National Action Plan” being implemented by Pakistan Army with support of its spy agencies is in full swing across the country for elimination of terrorists from the region.

The critical scenario of regional political situation especially in Pakistan and particularly in Afghanistan improved the importance of this conference and compelled the educated people specially writers, bureaucrats, politician, poets, civil society members and businessmen across the border and around the globe to come and share their views and suggest way forward for future planning for development of a peaceful society.

This was a successful event and almost all the stakeholders and key politicians from both sides of border participated in the conference. This conference elaborated on three main issues in three days:

2) Pashto as Educational language, and

3) Pashto literature and its requirements in light of current scenario.

Discussion on Pashto language, culture and norms among common people started after conducting Pashto International Conference not only in Pakistan but also in Afghanistan and other parts of world where Pashtoon are settled. These productive discussions and debates became possible through live broadcasting of conference through electronic media TV Channels and Radio.

In term of immediate impacts all the legend Pashto Language lovers and writers exchanged their ideas and sector of working by their expertise to learn from each other. They had not only ensured their support to each other but also exchanged their contact for future interaction through social media. As per concern of long-term impacts, it was assumed that the participants will support each other in different realms of life including; research ideas, cultural event conduction, sharing of ideas for research work with possible solutions for obstacles confronted by Pashto language writers settled in different corners of the globe.

Interestingly a huge number of female writers first time attended the conference without any cultural obstacle; they ensured their participation on all days of the conference. This conference practically proved that the assumed stereotypes regarding female participation in Pashtoon society and culture are self-imposed restrictions by religious minded people. In fact those are not a part of Pashtoon culture. Pashtoon are quite liberal and fully respect their women to work together with male in all those sectors where their services.

Pashto international conference was the first ever event in which politicians, writers, poets, teachers, scholars and other people interacted with each other. It was not possible without conduction of any such events for discussion. All regions where Pashtoon as a nation confronting different challenges, required collective efforts with extensive work for restoration of peace and harmony irrespective of whether the area it falls in Pakistani or Afghani territories.

Experts always says that the relationship between nations will not improve only with interaction of government officials with each other but it requirs the efforts of common people working in different sectors of life. Until interaction of writers, poets, actors, politicians, bureaucrats, sportsmen, youngsters and other key characters will not interact with each other government could not improve the relation at state level. So this conference indirectly eased the way for governments of Pakistan and Afghanistan to work for regional stability and restoration of peace.

This conference got attention of both governments to overview the demands of common Pashtoon settled on both sides of border between Pakistan and Afghanistan through resolutions of conference which were approved in last session. These resolutions were very extensive but few ones which are important to mention here are:

This interaction and resolutions will pave for a strong foundation to close the gaps between all those literary groups which are working for promotion of Pashto language, culture and its literature from different corners of globe especially in Pakistan and Afghanistan.

Published in The Balochistan Point on September 28, 2015