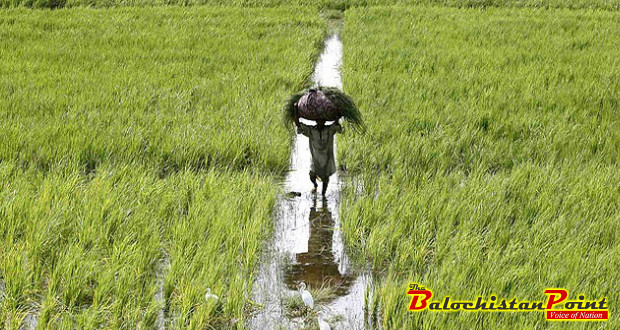 Agriculture and rearing of livestock is source of livelihood for majority foe people in Balochistan.  Nevertheless, it is the most neglected sector of Balochistan. Obsolete Research and extension infrastructure, dearth of agriculture Scientists particularly PhD degree holders, incompetent research and extension managers, widespread corruption, outdated irrigation system, frequent power outages,  high prices of seed, fertilizers and pesticides and lack of interest-free loan programmers for small farmers are the main problems agriculture is confronting in Balochistan.

The land in Balochistan is mostly dry, barren and water is scarce. Therefore, tube-wells are important for the agriculture productivity so Construction of dams and other reservoirs are the solution for the scarcity of water but for last 7 years no major dam has been constructed in province.

Not a single major dam has been constructed in Balochistan in last 7 years.

National Party government has failed to boost the economy of province. No significant dam has been built as a result underground water level is decreasing day by day. The load shedding issue was not taken up with federal government. Therefore, more and more land is becoming uncultivable in Balochistan. Consequently, large segment of population is falling in the vicious trap of abject poverty with disastrous consequences for province. Balochistan Agriculture Department was supposed to provide assistance to the farmers and modernize the sector with latest machineries and new methods of agriculture productivity. However, in spite of having extensive resources at the disposal of this Department, it has not played a significant role to help modernize this sector.

Agriculture Extension wing has 586 Agriculture Officers and 1016 field Assistants who do nothing and receive salaries at home.

Provincial agriculture Department has six establishments such as Agriculture engineering, Agriculture Research, Agriculture Extension, Agriculture on Farm water Management, Corp Reporting services and Cooperative Society. All these establishments are supposed to provide assistance to the farmers in their respective field but, farmers have not received an iota of support from any of these government institutions and farmers are facing plethora of problems that includes, financial constraints, lack of machinery and modern techniques, scarcity of water as well as many other planting, harvesting and marketing issues. The resources at the disposal of different wings of agriculture department are subjected to corruption, as a result, agriculture sector in Balochistan is suffering irreparably and farmers, who are the lynchpin and the main propellers of the agriculture growth, are falling in the trap of poverty. In the face of frequent electricity load shedding, the government should have focused on providing solar based tube wells to the poor farmers. It is pertinent to mention that huge amount is allocated under Provincial PSDP for solar based tube wells for deserving farmers. However, this amount, allegedly, goes into the pockets of parliamentarians and bureaucrats.

A big chunk of water is wasted in obsolete irrigation system in Balochistan. The objective of  On Farm Water Management is to provide new techniques of irrigation to the poor and illiterate farmers regarding modern irrigation methods but On Farm Water Management is wholly dysfunctional therefore, it cannot introduce modern drip irrigation and sprinkle irrigation systems in Balochistan in order that to avoid huge chunk of water wastage in process of irrigation. Construction of new dams are the need of hour in order to decrease the tube wells for irrigation because tube well use in the long run causes salinity which we can observed in different areas of Balochistan where land has become uncultivable as a result of tube wells. Apart from rhetoric, this government could not constructed large dams in the province.

Published in The Balochistan Point on September 28, 2015